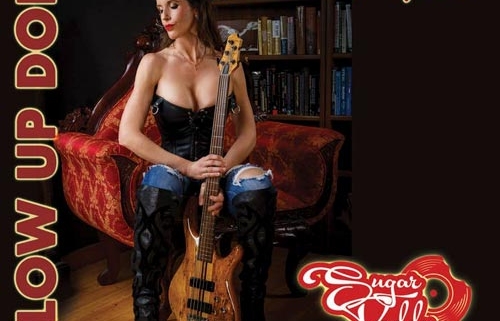 “Blow Up Doll” is Anni Piper’s first recording since relocating to Oregon several years ago. Produced at Jimi Bott’s Roseleaf Recording, Piper brought together an impressive collection of some of the area’s finest musicians and laid down an incredible mix of original and cover material of rousing musical depth and accuracy. Piper is in fine form, both vocally and instrumentally, and her songwriting here is some of the best she has ever produced. There is never a lull throughout the disc, and her accompanying musicians offer fiery support for her performances, all the more impressive since much of the disk was recored live in the studio, often using the first take.

Piper’s originals compositions often take their inspiration from her life experiences. These tunes deal with the failed relationships of those who needed to be in control and her new resolve to move forward. The title track, “Blow Up Doll,” a semi-finalist in the International Songwriting Competition last year, details a former partner who treated her as something to just cast aside once he found what he was looking for. “Big Bengal” describes her new direction in relationships by focusing on her pet cat, while the closing “24 Guys Named Dave” is a humorous tune about dating only guys named Dave and what they’ll offer to her.

On the tracks that Piper covers, they’re all completely redone in her own fashion and may take a moment before they’re recognized. “Get Right Church,” “Cake Walk Into Town” and “Sailin’ Shoes” are great examples of how well she teams up with guitarist/vocalist Bob Shoemaker. Other first-rate covers include Bruce Springsteen’s “Pink Cadillac” and Willie Dixon’s “Built For Comfort; and again Piper has treated them as her own making them fresh and exciting.

There is a bevy of tremendous guitar playing throughout the album aside from Shoemaker’s remarkable work, including great riffs from Joseph Barton on “Contagious” and interplay between AC Porter and Ben Rice on “Big Bengal,” and Troy Johnson lays it out nicely on “Uncrustables.” Other artists contributing are Steve Kerin on keys, Melonie Owen on vocals, drummers Dave Melyan, Jeff Hudis and Jeff Aboott, and of course engineer/producer Jimi Bott delivers nice percussion, too.

“Blow Up Doll” is one of those albums that will be considered as one of the best of the region when this year comes to an end, and it should be played for a great deal of time long once this year is over. Anni Piper has created a true gem here.