Been There Done That
McKenna Records 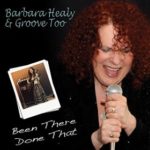 Barbara Healy has long been one of the finest vocalists in the lower Willamette Valley whose talent is reflected in her amazing, passionate songwriting and performances. Since the 1980s she has been delivering smoking hot music filled with heartfelt soul in bands such as The Allnighterz, The I-5 Nine and her current outfit Groove Too. Her latest release, Been There Done That, is her sixth recording overall, the second with Groove Too, and it is filled with her own personal experiences.

All of the material on Been There Done That is original with the exception of the closing take on Big Jay McNeely’s classic “There Is Something On Your Mind.” Healy shares songwriting duties throughout with bandmates guitarist Gerry Rempel and keyboardist Gus Russell, and the band consists of bass player Scoop McGuire, drummers Brian West and Alex Huber, and “The Treacherous Horns” featuring Dave Bender on trumpet and flugelhorn, and Tony Johnson on sax. All musicians provide over the top performances and very tasteful solos throughout the entire recording.

The album opens up with a moody, slow burning number, “Struck By The Blues,” with all of the members taking nice showcase runs behind Healy’s precise vocal delivery. Rempel especially puts forth some sizzle on his guitar strings on this one. That is followed up with a bit of humor as Healy tells her pursuer to “Put Your Money Where Your Mouth Is,” because buddy if you’re not going to deliver on what you claim to make her feel good, just stay out of her neighborhood. On “I Close My Eyes” there is so much going on in today’s world that she would like to close it all out of her mind. “Rumba Of The Heart” has a Latin percussive flow with a little New Orleans piano flavor, and another burning guitar solo. “Shake It Up” has a terrific Memphis R&B feel and may show Healy’s magnificent voice at its very best making it a stand out track among a disc full of winners. The final original “Four Alarm Fire” is introduced with some seriously punchy horn work that brings the song on strongly and the pace is fitting of its title and makes you want to snap your fingers right in time.

Been There Done That is a very pleasing collection of bluesy-soulful fun. There is a reason why Barbara Healy has stood tall within the Eugene and Oregon, blues scenes for four decades. When you have talent like this, material like the songs gathered here, plus an assembly of fantastic musicians, you have the formula for not only longevity, but for first-class releases as seen here. 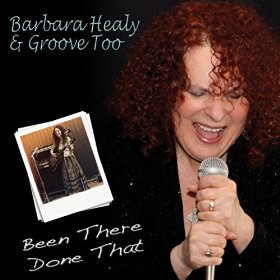