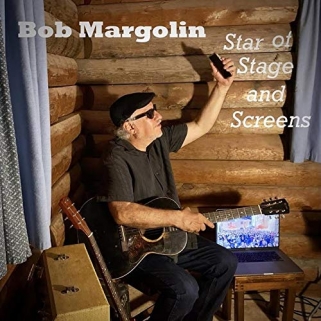 Star of Stage and Screens
VizzTone

The pandemic is still on, and Bob Margolin is still sitting at home … brooding about it.

Fortunately for us, he has a 1930s Gibson and a National steel guitar handy. He uses both to express his frustrations and fears in his 12th solo album, a raw, acoustic EP titled “Star of Stage and Screens.”

When “Steady Rollin’,” as he’s known, talks screens, of course, he means phones. Unable to perform on a live stage since March, the 71-year-old award-winning bluesman who spent seven years backing Muddy Waters has been reduced to singing in front of electronic devices, reaching out to audiences via social media.

Like the rest of us, he’s had plenty of time to dwell on the bygone days, the importance of the people and things that he loves — and who’s to blame for this whole debacle.

It’s clear that among the great loves of his life are the audiences for whom he’s performed for nearly 50 years. “I’d love to turn off my phone and grip the neck of my guitar and play all night for you,” he sings on the title song. But for the moment, he notes sadly, “House party means my house.”

With “For My Teachers,” Margolin reaches deep into his past for the wisdom he’s learned from people who’ve passed through his life and helped shape and guide him. “I think of all those passings, and I think I understand at last,” he sings.

He offers some wisdom of his own on songs like “Let It Go:” “You can’t make it better, but you sure can make it worse,” he cautions. His advice to people chafing at everyday annoyances and injustices: Take a breath and let it go.

At the same time, he’s no advocate for rolling over. His “March 2020 in Stop Time” makes clear who he blames for the country’s current predicament: “How did it get so bad? Just follow the money.”

He sounds some of the album’s most hopeful notes on “After Party,” which conveys his wishes for a not-too-distant day when all of this might be behind us, and we can savor the gatherings we once took for granted. “I stay at home,” he sings with a hint of defiance, “but I still play.”

Besides a revealing portrait of how painful 2020’s isolation has been for artists who crave crowds and live to share their art, “Star of Stage and Screens” is a masterful display of musicianship from a guy who doesn’t need to prove much of anything anymore. It’s an intimate visit with a man who understands his art — and himself. And he understands he needs to get back out on the stage.

Yeah. We’re ready for that “After Party,” too.