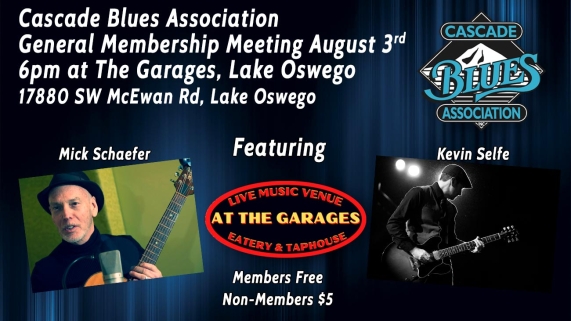 Join us for our monthly member meeting at The Garages, Lake Oswego from 6pm on Wednesday August 3. This time around we feature solo act Mick Schaefer, whose debut album was recently released on LIAB records. Then it’s local favorite, Muddy award winner and VizzTone artist Kevin Selfe to close the night. Admission is free for CBA members and $5 for non-members. There will be a raffle as always with awesome musical prizes donated by Music Millennium. If you’re a musician, be sure to bring your instrument, because the Timmer Blakely jam starts right after our meeting wraps up.

https://cascadebluesassociation.org/wp-content/uploads/2022/07/8-22-Gen-meeting.jpg 731 1300 Anni Piper https://cascadebluesassociation.org/wp-content/uploads/2020/10/CBA_Logo_top_main.png Anni Piper2022-07-18 12:25:142022-08-17 12:12:02August 2022 General Membership Meeting
Modern Blues, Americana and Roots Songwriter & Performer
Jody Carroll is a blues & Roots performer and songwriter who effortlessly creates bold interpretations of old Blues and American Folk music, his own songs, stories and improvisational musical journeys. He is a Finger style/slide guitar master and amazingly soulful singer blending flavors of old Blues, Folk, Mountain music, Jazz and Rock all together into a true power packed gumbo.
JC Has toured with or shared the stage with legends such as Buddy Guy, Honey Boy Edwards, Jack Owens, Louisiana Red, R.L Burnside, Johnny Winter, John Mayhall, Roy Rodgers, George Thorogood, Derek Trucks & Susan Tedeschi, Leo Bud Welch, Robert Cray, Roy Rodgers, Eddie Kirkland, Robyn Trower, John McEuen , Ural Thomas, Charlie Musselwhite, Canned Heat, Robert Earl Keen, Sonny Landreth, Shameka Copeland, Paul Geramia, Sonny Landreth, Roy Bookbinder and even members of Metallica once back in 1987 (strange story).
He appeared to great critical response at Merlefest 2018.
From there to here:
Jody Carroll McMurrian was born on April 5 1968 in an area called the San Joaquin Delta of California. It’s a vast water filled area where the Antioch River, the Old River, The San Joaquin River and the Sacramento River all meet up to pour into the San Francisco Bay. His family hails from the hills of Buffalo Valley Oklahoma via Arkansas on his father’s side and Amarillo Texas on his mother’s side.
Jody Carroll grew up hearing whispers of old American music on the radio or from his fathers guitar. His father started him off with a couple Willie Nelson songs and plenty of AM country radio. His grandfather, who also played guitar when he was young, had come from the remote rural Buffalo Valley hills of Oklahoma 20 years earlier with his family in tow. He and his brothers had been running whiskey in those hills one to many times and had been effectively asked to leave the state by the law. JC’s grandfather left town and made his way over to California and then up to the bay area for work in the ship yards of Port Chicago. Jody grew up in the 70’s and 80’s working on the families Northern California farm, building barns, riding horses, drawing, learning music from old blues, folk, Rock and Soul records.
His first guitar was his father’s steel guitar that had languished for many years up in the attic until he found it. After secretly playing it for a while, he asked his father to teach him some old folk tunes that he had played in his early years and some lap slide licks. He took to it like a fish devouring all he could learn from the family record collection. After many years of playing in garage rock bands, he happened upon the Harry Smith Anthology of American Folk Music and the recordings of Robert Johnson. That sealed the deal as it where, he took off into the backwoods of old weird America and never looked back.
“A new blues artist we now can’t live without….Jody Carroll, whose textured blues and other roots were dark and haunting…..If there is one artist who embodies roots music to its fullest, it has to be Jody Carroll”
No Depression, Amos Perrine 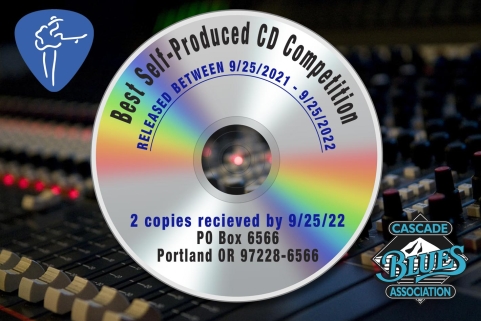 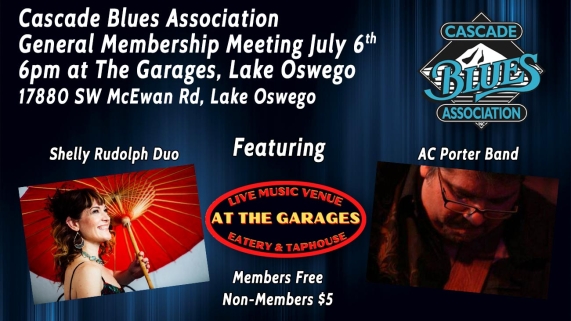 Join us for the Cascade Blues Association member meeting at The Garages on July 6 at 6pm. After a huge festival weekend, we know you will need some more blues to help you recover. Please come and support our meeting and our artists, to keep the blues alive in Portland all year long. Opening act is the Shelly Rudolph Duo, followed by AC Porter Band. See you there!