Thanks to Mike and Debra Penk for keeping us updated! Are we missing something? Let us know HERE 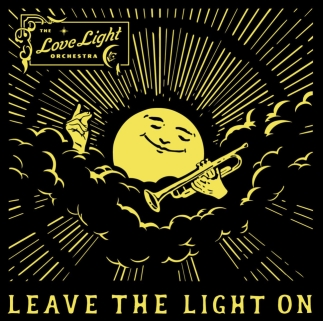 The joy of listening to so many new music releases is that occasionally an album comes across my desk that reminds me of why I fell in love with this music so many years ago. Such is the case with The Love Light Orchestra’s debut recording “Leave the Light On.”

Oh, man — I adore this record. It effortlessly creates the image of a smoky, poorly lit Memphis roadhouse on a steamy summer evening in, say, 1956. The record has it all — sweaty horns, a sturdy, soulful rhythm section, stirring, combustible vocals, saucy lyrics — and it’s altogether wonderful from beginning to end.

I usually try to avoid hyperbole, but every cut on this album is just terrific, from the loping blues shuffle of “Tricklin’ Down,” the energized sway of “Follow the Queen,” to the album’s only cover, a piercing rendition of B.B. King’s 1950s blues hit “3 O’Clock Blues.” This last tune offers the opportunity for the horn section (Scott Thompson on trumpet, Jason Yasinsky on trombone, Art Edmaiston on tenor sax and Kirk Smothers on baritone sax) to weave a potent spell around Joe Restivo’s incendiary guitar playing. This record is simply chocked full of splendid and authentic Memphis-style blues and soul.

It’s a difficult chore to place one cut above the rest, but if forced to pick one, it would have to be the languid “Time is Fading Fast.” Here, John Németh’s stunning vocals, at once subtle and dazzling, are to my ears, his best work on the album. And given the quality of his singing throughout the record, that’s saying something indeed. This tune begins with a gentle swing and builds to an explosive vortex of intoxicating vocals and whirling horns. Heady stuff, this.

I can’t recommend this album enough, and the fact that it’s their debut release makes it even more remarkable. I imagine, given the energy and potency of the record, The Love Light Orchestra is absolutely killer live. 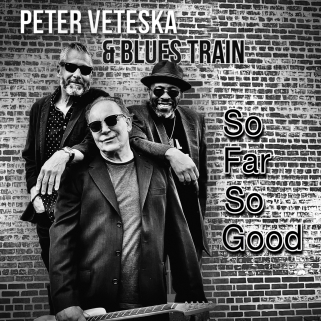 This album is like a textbook, and trust me, dear listeners, that doesn’t mean to say that it is dry and dull, but more an endorsement of the accuracy of the grooves that are presented to us. It just ticks all the boxes, each song like a chapter on how to play the blues.

Veteska is in the New York Blues Hall of Fame and has released six albums in seven years, two of which were chosen as the Jersey Shore Jazz and Blues Foundation’s IBC entries for Best Self-Produced CD. Like many of our bandleaders, Veteska is a guitarist, singer and composer. He has great tone, great approach, and a great circle of friends. Jeff Levine on keyboards lends such excitement to the opening track, and Jenny Barnes on vocals has total control and unlimited sass in her delivery.

“Young Bold Women,” a James Cotton cover, is one of my favorites. This tune is absolutely raucous, and so much lively fun as we move seamlessly from rumba to swing. Veteska and band  – Coo Moe Jhee on bass and Alex D’Agnese on drums – are from New Jersey, a popular spring break destination, where one is sure to find young, bold women aplenty. Their state created Snooki, so surely the local gigs for Veteska must get fairly hectic.

The closing track, “Can’t We All Get Along,” is like the espresso shot at the end of a fine meal. What a way to finish with this original mid-tempo funk/soul ballad. The vocal harmonies and picturesque minor chord changes make this the perfect bittersweet ending. 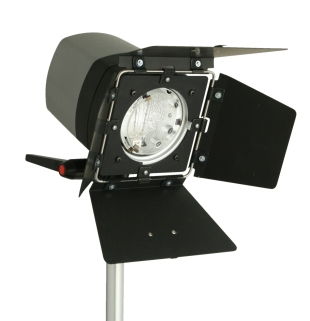 You might notice the CBA member meetings have a new home! We know that a venue in Lake Oswego might have been a controversial choice for some, but one of the things that is so important to the survival of blues as an art form is getting youths involved. At The Garages is a venue that welcomes all ages and the board felt this was the way to go for the future. If you haven’t been, it’s an amazing space, and Kent was kind enough to take a few minutes to talk about it.

AP:  Anyone who goes into The Garages will notice the stage and dance floor are both very prominent! It’s obviously a venue centered on music. What’s your history with music and where did you find your passion for it?

KD: When I was about 10 years old I got my first trap drum set.  I banged on those skins through my high school years in a band called The Flock.  We were the “go-to band” for all school-related dances.  We fanned out to other schools and some private parties. My house was the band’s “hangout,” so we had lots of parties in the basement.  We even played in some battles of the bands and gained some Chicagoland notoriety.

My first album purchase was the first Santana album, which was full of great percussion and drum solos.  I knew at that point that music would be an important part of my life. In college I graduated with a speech and broadcast communications degree. I served my internship at KPTV, which was an independent TV station back then. I also ran the Oregon State University radio station, KBVR-FM.

At that time I organized a live show which featured local bands. After college, KPTV hired me, where I worked for six years. Then I got a wild idea to move to Los Angeles, where I went to work for CBS Television/Radio. I spun records as a disc jockey on radio as a side gig, then full-time until returning to Oregon in 1986.  My love of music has remained even though I got into other forms of employment.

In 2016 we started The Garages as an underground place to play live music. It became too popular and the city of Beaverton, where music venues are illegal, shut us down. We reopened a few months later in what was known as The Satellite Pub Bar/Restaurant. We built a temporary stage to avoid city regulations, and we grew into an “unofficial” music venue. With our recent move to Lake Oswego we can now be an official music venue.  We have live music seven days a week with a great variety of music genres. We are lovin’ it!

AP:  I’ve always wanted to own a bar. Tell me why I shouldn’t. What’s been most difficult for you running this place, especially in the context of COVID?

KD: Owning a bar/restaurant is not for the weak at heart. The reason is it takes a serious commitment of time and investment.  COVID intensified both commitment and investment. We did everything we could to continue the live music path we have built. If anyone asked me how we have weaved our way through the past two years, it’s simple: The support for live music is very strong in the Portland metro area.   When other venues closed or shut down, we never did.  But to answer your question directly:  Owning a bar is a huge risk. If you don’t like to take chances, don’t do it!

AP: Most memorable gig at The Garages?

KD: It was a tribute to Pink Floyd. The guests were mesmerized. It was amazing.

AP: Portland is a town where we like to keep it weird. What’s the strangest thing you have seen while running Garages – anything paranormal or extraterrestrial going on behind the scenes?

KD: We have a ghost we call “Henry.” He was at our original location and he died falling off the roof in 1955 when the building was being built. We love this guy. He has shown his presence throughout the years by moving items, turning on lights and following us in the hallways. We have talked with him and invited him to come with us. We just had evidence that he has come to the new location because we have him on camera late at night after everyone has left. Cool dude with nothing to fear. 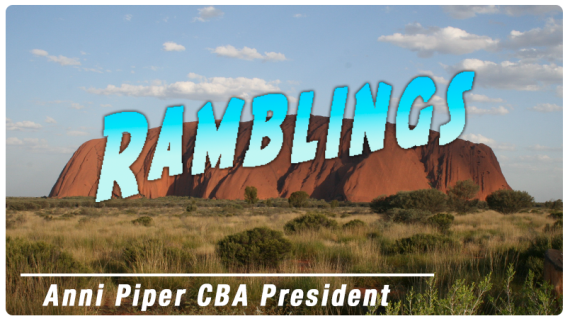 Congratulations to Robert Umali Evans, the new vice president of the Cascade Blues Association. I have to give him full credit for holding this organization together during a difficult transition time. Much work goes on administratively to keep the CBA running, not to mention planning for future events. Thank you, Robert, for taking this on – you’re the man of the hour.

The board is simply jubilant to welcome our newest at-large board members – Betsy Clayton, Clay Clayton, James Ortega and Ben Rice. It feels like we have a great balance of music creators, music appreciators and dancers involved. We come from diverse backgrounds and it’s so exciting to have everyone willing to share their opinions and skills.

The Garages in Lake Oswego is our new home for the monthly member meetings. I know this is a controversial choice for some, but the board decided that having a venue where all ages could attend was a priority. I’m willing to help with car pooling for those who are coming from North Portland – hit me up! We feature LaRhonda Steele and Sugar Roots in March, and April is Josh Makosky and Tall Static.

Speaking of the member meeting, there was some discussion among the board about holding a second member meeting monthly in North Portland or Vancouver. We could have a band at The Garages and a solo/duo act each month at a northern venue. What do you think? Let the president know!

Do you want to perform at the Waterfront Blues Festival? Then enter the Cascade Blues Association Journey to Memphis competition 2022. Heats will be late May or early June at a venue to be determined. The two top scoring bands and solo/duo acts will battle it out on the Fourth of July weekend at Waterfront Blues Festival to see who represents us at the International Blues Challenge in 2023. More information coming soon. 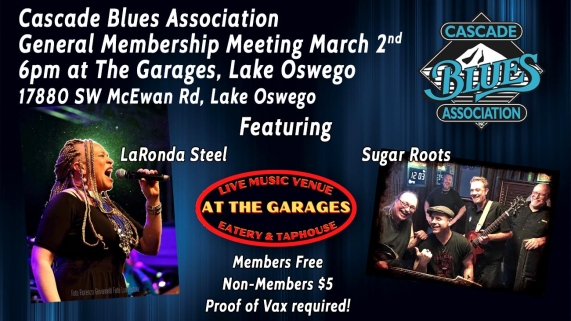 Welcome to the new home for the Cascade Blues Association monthly member meeting At The Garages, Lake Oswego. We are excited to secure a venue that will allow our under-21 members to attend. This month we feature LaRhonda Steele as our opening acoustic act and Sugar Roots as our band. LaRhonda is a longtime CBA favorite, and Sugar Roots are our International Blues Challenge representatives for 2022. Eat, drink, dance, listen and enjoy!

THE GARAGES COVID-19 POLICY:
The venue now requires all customers, performers and staff to show proof of a negative COVID-19 test within 72-hours before entering the Garages, to provide proof of COVID-19 immunization (at least two weeks after final dose) with an appropriate ID matching the name on your documentation.

PLEASE NOTE:
These confirmations will apply to all members of your party before they are allowed to enter the Spare Room.

Free COVID-19 testing in your area may be found by resources from the U.S. Department of Health & Human Services.

Masks, face coverings or face shields are currently required in all indoor spaces in Oregon, regardless of vaccination status, unless seated at a table. Converging studies show that wearing a mask can help protect both us and the people around us from spreading and catching COVID-19. It’s an empowering way for each of us to protect our communities, our families, and ourselves.

Entry requirements are subject to change.
​

Thanks in advance for your patience and understanding!