You are here: Home1 / Features 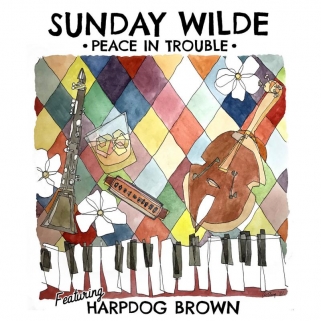 Last month saw the launch of Sunday wilde’s ninth album, Peace in Trouble, featuring guest Harpdog Brown. And launch it most certainly did – to worldwide acclaim, hitting blues and roots charts across Canada, the U.S., the UK and Europe at or very near the top. Within weeks of its release, it hit a succession of #1’s: Song and Album (Canada), Acoustic Blues Album, Acoustic Blues Song, and #7 Blues Album worldwide, #4 Blues Song Worldwide, as well as hitting #2 on Amazon’s Traditional Blues best seller list (just behind Nina Simone).

If you haven’t heard of Sunday wilde, you can check out her contributions to blues music. No stranger to the IBC’s in Memphis: three of her past albums have received nominations for Best Self-Produced, and last year she competed as a duo as well as Best Self Produced album. Nominated to the Independent Music Awards and International Songwriting Competition (where she also received an honourable mention) and won many awards for Best Female Blues, Best Acoustic Blues, Best Blues Song … you get the idea!

This album strips back blues music to its acoustic bones, just Sunday singing at her piano in her living room, with bass and other acoustic instruments adding full flavour. No drums. No guitars. Aside from Willie Dixon’s Home To Momma, Sunday wrote all the songs: tales of love, trouble, peace, worry, men, advice and friendships. A first listen to this CD catapults the listener to an old-time honkytonk juke joint where everyone lets loose with wild abandon and sticky liquor stains the floor.

But this is about to much more than the music, and this isn’t really a CD review (there are terrifically detailed reviews out there already, like this one from American Blues Scene or this from The Alternate Root). Peace in Trouble has been all about collaboration and reaching out in ways that may not have been apparent or possible prior to a worldwide pandemic forcing us to approach things differently.

Despite the singer-songwriter-producer residing in northern Ontario, there is significant Pacific Northwest connection to the music on this album, beginning with Vancouver B.C.’s harp player Harpdog Brown, who is featured on five of the eleven tracks and even inspired one of the songs. But Sunday didn’t tell him that one of the songs was inspired by (and about) him until after they’d already recorded it because, as she puts it, “I’ve written lots of songs about many different men. Some men do NOT like it, it makes them feel weird or something.” Luckily Harpdog was cool about it.

She finished writing One Day We Will after Covid shut downs cut short Harpdog’s tour outside Toronto and he ended up crashing at her place both on his way there and back. Speaking about his take on the song, he tells of late nights “sharing stories and brown liquor, I somehow inspired her to write the song.” Sunday laughs as she explains the song is about a woman, her, “or any woman, hoping there’s gonna be a man that comes along that’s brave enough to hang out with them.” It takes a big bold personality to fit so comfortably with an equally big bold personality, and with pandemic lockdowns slowing down the pace of life, they would finally get their opportunity to work together on a project.

Then, while Sunday was putting finishing touches on the album this winter, Harpdog suggested she reach out to Seattle-based visual artist and blues musician Joel Astley to see if he was interested in doing some album art. Joel was excited to work with Sunday to create something unique. They teamed up to present a world premiere listening party of her new music aired on Facebook Live. People watched as Joel designed and painted the album cover art over the course of a few weeks, culminating in a special virtual event in January when audience members heard the brand new album for the first time through the art studio speakers on Joel’s live stream show while he painted his design. You can see snippets of the special event on Sunday’s YouTube channel. Joel has created a following for his visual art by broadcasting every Sunday evening from his art studio, and he is also known regionally for his work as an award winning singer, songwriter and harmonica player for the High Note Group (which incidentally has been nominated in EIGHT categories in the Washington State Blues Awards! Watch it on April 18th) The finished cover art is also available as a t-shirt via Joel’s Etsy shop.

Sprinkling in just a touch more West Coast collaboration with a Portland shout-out, Fraser Valley Blues Society President Cora Price (in British Columbia) and CBA Secretary Marie Walters were able to contribute some really cool animations to add visual oomph to Sunday’s Spotify channel. You can find more information on her website at www.sundaywilde.com and purchase her music via Bandcamp, Apple, Amazon.