You are here: Home1 / Northwest Festival

Eugene’s Rainy Day Blues Society presents the first Village Blues Festival to be held in Cottage Grove, Oregon, on Saturday, September 5 at The Village Green. Eugene is located in a county who have moved beyond phase one of the Covid-19 regulations, so they’re able to hold outdoor events that can allow larger crowds. This event will be socially distanced and safety precautions will be in place.

Performing at the event will be a multitude of Northwest favorites, headlined by Portland’s Anni Piper; the Pacific NW Women’s Blues Revue with Sonny Hess, Joanne Broh, Kathryn Grimm and Theresa Fratto; and Fret Logic with Jerry Zybach, Stan Welch, Rick Markstrom and Mike Hatgis. The day’s festivities will be hosted by Froggy. 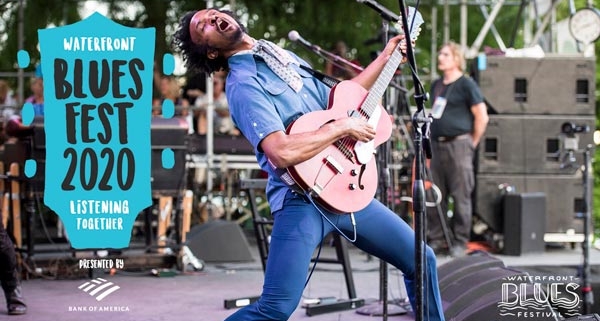 We may not be at the waterfront, but we are still coming to you this July 4th weekend ✨ We are proud to share Blues Fest 2020: Listening Together presented by Bank of America. Join us as we bring the joy of the Blues Fest to you through three exciting programs:

➡️ The Blues Fest Bandwagon will bring live music to driveways, cul-de-sacs, and front porches in the Portland Metro Area July 3 and 4. And guess what? YOU can nominate your favorite friend, frontline hero, or family member to be a part of the socially-distanced fun. We’re working with amazing local musicians to safely hop on the Bandwagon to bring some tunes, happiness, and smiles to our community. Nominations are now closed 🚘

➡️ Tune in and turn it up as KOIN 6 hosts a two-hour July 4th TV special celebrating some of the most memorable performances from the Waterfront Blues Festival, capped off with a replay of the awe-inspiring fireworks show over the Willamette River. From the comfort of your living room, the KOIN team (and special festival guests!) will have you reliving some of the magical musical moments from the Waterfront. Catch all the fun on July 4 from 9pm to 11pm on KOIN 6 or at www.koin.com.

➡️ Set up your lawn chairs, get the BBQ going, and tune in to KBOO all weekend long as you groove to the Blues Fest On Air. Local Portlanders can catch all the excitement on 90.7 FM and our festival friends across the world can join us at kboo.fm/listen-now. Blues Fest On Air will feature two full days, from 12pm to 7pm, of crowd-favorites sets and behind-the-scenes stories from the Waterfront Blues Festival throughout the years.

Head to waterfrontbluesfest.com for more details 🎶 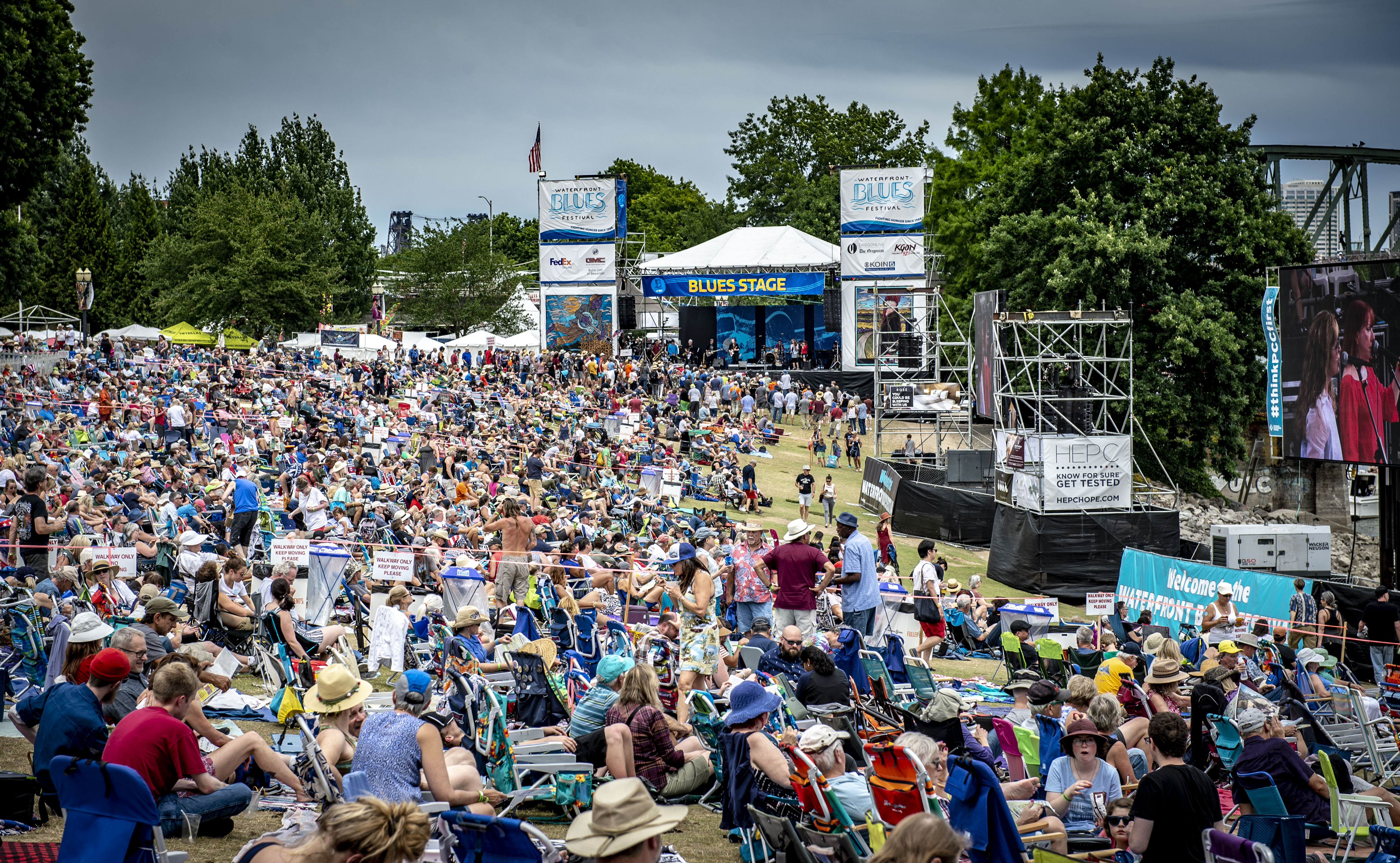 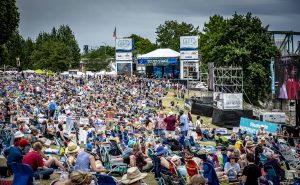 By all accounts, last year’s Waterfront Blues Festival was a smash – another beautiful Fourth of July weekend run along the Willamette River. What many don’t know is the underlying turmoil that nearly closed the gates for good. Festival ownership changes, management shakeups, and new sponsors and beneficiaries – all late in the game – put the fest on the brink.

It took some muscle, grit, huge leaps of faith, motivated new partners, and a little luck, but the 2018 edition came off without a hitch. With a fest led by a strong roster of national, regional and local talent that included not only the traditional side of the blues, but some new acts who are fearlessly pushing the boundaries of the genre and bringing something new to the party, few can dispute the event’s success last year. 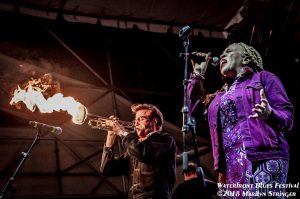 And that includes what lies and continues to live in the fest’s DNA – a strong sense of community. New beneficiary, the Sunshine Division, continued the event’s long lineage of letting music help those in need.

The good news is the 2019 version, set for July 4-7 at Tom McCall Waterfront Park, is on firm footing and firing on all cylinders. Even as operating costs skyrocket and shifting demographics continue to alter the music landscape in general, the fest’s heartbeat is strong and, per its long history, remains rooted in and deeply committed to the music.

A full slate of passes and ticket options are available to get you through the gates again this year (visit www.waterfrontbluesfest.com for complete information) but don’t dawdle – they sell out fast. 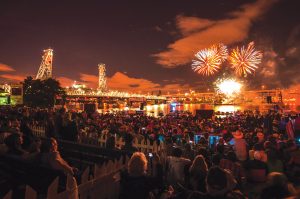 Fest-goers can take in the full experience, with two main (and alternating) stages, the Front Porch and Crossroads stages, the Louisiana Pavilion, after-hours shows and cruises, blues-swing and Zydeco dance lessons, Fourth of July fireworks, a full complement of food, beverages and fest merchandise, and more. Even the canned food drive is back, with all proceeds going to the Sunshine Division.

Unlike other major festivals, the backbone of the WBF has always been a strong inclusion of top-flight local and regional acts, many of whom have built strong careers here and gone on to greater heights. This year is no exception. 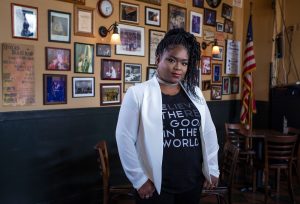 There’s no dearth of major-league talent either. Native son Robert Cray and his band return after a long absence and will help fuel the four-day run along with the explosive Trombone Shorty (who played his first big Northwest gig at WBF in 2010) and his band Orleans Avenue, New Orleans royalty Cyril Neville, Shemekia Copeland (who nabbed two BMA awards recently for Album and Contemporary Blues Album), the hard-working Karl Denson and his funky Tiny Universe, the rowdy St. Paul and the Broken Bones, the well-traveled California Honeydrops, and blues-rockers Vintage Trouble. 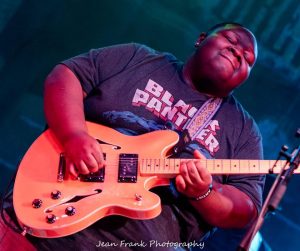 And don’t miss the sizzling guitar work of Christone “Kingfish” Ingram, who also got a big break at WBF in 2015 when Buddy Guy called the youngster on stage for his headlining set, a spectacular guitar duel that led to Guy’s producing the new Kingfish recording, just released on Alligator.

If you’re looking for something fresh, try Hawaii’s Ron Artist II & the Truth, and the pure African influence of Mali’s Songhoy Blues, led by Oumar and Aliou Toure.

Fans of TV’s “The Voice” can catch newcomer Sarah Grace and her band the Soul. She packs a big soulful punch in a pint-sized package, and is a triple threat on vocals, trumpet and the mighty Hammond B3. She may surprise you.

Zydeco and Cajun lovers are in for another solid flight of the rollicking party music. Chubby Carrier makes a return to the fest with his Bayou Swamp Band. Check out Louisiana’s Feufollet, Curley Taylor and Zydeco Trouble, Wayne Singleton and the Same Ol’ 2-Step, and Lil Pookie and the Zydeco Sensations.

This is just a taste. The list goes on, from the Brazilian beat of Bloco Alegria to the traditional blues of Dan Nash, and from the West Coast sounds of Lydia Pense and Cold Blood, Terry Hanck and Roy Rogers with Carlos Reyes, to the gospel goodness of the Sons of Soul Revivers and the NW Women in R&B Tribute to Sister Rosetta  Tharpe.

It’s a bountiful four days. Get some rest and remember to hydrate.