What a terrific turn-out we had for our initial General Membership Meeting at The Eagles last month — so many people we have not seen for a long time and many first timers, too. Bringing music back to inner South East Portland looks like it will be a very good thing indeed for all. Well, when you have great crowds, then you definitely need to bring in some great music to entertain them as well. And we’re planning on doing just that every month.

So, for June we’re bringing back a long-time friend who hasn’t played for us in some time. James Clem is a master of not only blues guitar, but he is one of the finest ukulele players that you can find anywhere, and in 2015 Clem released an acclaimed uke-based CD, Sugar Moon. The instrument has skyrocketed worldwide the last few years and James has performed at ukulele festivals in the US and Europe. Every fall he does a four-week tour in Europe with blues gigs to a very loyal following. Be prepared to hear both uke and guitar music during his set, as he will also be presenting new material from his forthcoming blues CD, titled Stuff You Gotta Watch, set for a June 15 release date. 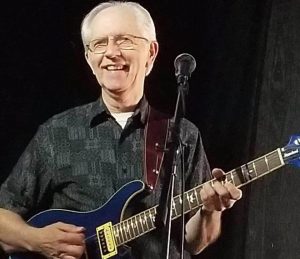 The second set of the night will bring another friend who has not performed for the CBA in way too long a time period, the Dan Hess Band. Primarily a blues and R&B outfit, they have a variety of older and newer blues material that is highly recognizable and extremely danceable. A very professional and tight band, that along with Dan on guitar features Fenix Sanders on sax, Juliet Teriill on bass, and Chandler Bowerman on drums. This is a sensational outfit that plays regularly around the Portland area and it’s ready to transform our meeting into a party.