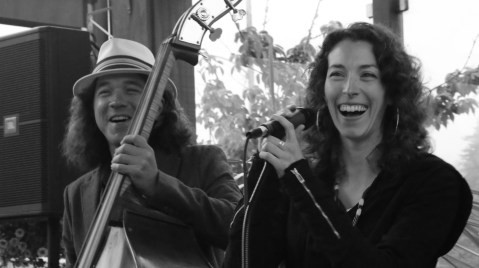 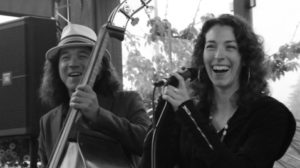 Julie Amici will be celebrating the release of her new Yellow Roses EP on May 29th at Lake Theater & Cafe. The project is the result of a 6-month collaboration between Julie Amici, Dean Mueller, and their producer Alan Jones. The release party feature Timberbound as the opening act followed by performances that feature the songs written for the CD.

In the last couple of years, Julie Amici has been nominated for the “Best New Act” and “Best Traditional Act” CBA’s Muddy Award’s. The Yellow Roses EP is a significant departure from the jazz and blues vibe that Dean & Julie are most noted for and takes a significant turn in the America direction with all original compositions. To help with the recording, they enlisted one of their regular guitar players, Alan Hager, from the Curtis Salgado Band, keeping continuity with their blues past. To move in the acoustic/Americana direction, they enlisted the help of Gavin Duffy on banjo and mandolin and Jenny Estrin on violin. Gavin and Jenny are both members of Timberbound, a regional folk act lead by Joe Seamons.

Timberbound will be kicking off the party with a set featuring its own renditions of folk songs, taking the audience on a tour of old sawmills, logger’s cabins, and fisheries of the Pacific Northwest. The debut viewing of the “Yellow Roses” video will start the second set and then the TImberbound cast will then be joining Julie Amici, Dean Mueller, Alan Hager, and Alan Jones for a stirring live rendition of the Yellow Roses EP.

General admission tickets for this event are $15.00 with a limited number of VIP Table seating for $80.00 (seats four, located in lower section closest to the stage) Tickets are available in advance at laketheatercafe.com. Show time is 7:00 pm.

Duffy Bishop Returns To The Lake!