You are here: Home1 / Past PDX Blues Event2 / Missy Andersen – With The Lisa Mann Trio 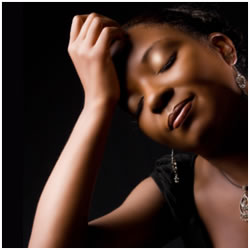 Lovers of blues, soul, and gospel will want to catch Missy Andersen and her “One Man Band,” guitarist husband Heine Andersen. Missy sings in the languages of Southern blues and Motor City soul, and all dialects in between. Heine hails from Denmark, but is well versed in American roots music and needs no drummer to keep a steady blues beat. Missy has been nominated for two Blues Music Awards Soul Blues Female Artist, as well as nominations for a Blues Blast Award and multiple San Diego Blues Awards.

Sharing the stage is Portland’s Lisa Mann Trio. Lisa has won two coveted Blues Music Awards for her bass playing, as well as Blues Blast’s Sean Costello Rising Star Award, and is in the Hall of Fame of the Cascade Blues Association.

The show starts chill, with Missy and her One Man Band, then heats up with a set from the Lisa Mann Trio, finishing with an explosive set with all artists — it’s a slow burn taking you on an increasingly intense musical journey.