The Cascade Blues Association continues our long-standing tradition of bringing great music to our members with our monthly general membership meeting. We’re always striving to offer some of the top talent of our region, favorites and perhaps someone new that will spark your interest to catch at our fine venues in the area. 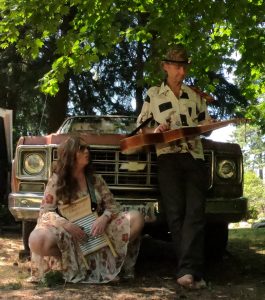 For October, we are pleased to bring Mojo Holler back to play for us. Mojo Holler weaves threads from mountain ranges to the Mississippi Delta into a tapestry of indie folk rock.  Formed as a duo in 2012, “Missi & Mister Baker,” the pair released their debut album, “Where Black Ravens Flew,” in late 2014, and were tapped to showcase at South By Southwest in 2016.  Its founder, Louis Black, said of the pair: “Why Missi had to move to Portland from Austin in order for The Bakers to channel their inner Mississippi Fred McDowell, I do not know.  But she did, and they did.” The album combines complex rock guitar and country stylings with rich vocals that hearken Joplin and Fleetwood Mac.

Lisa Lepine, the late Portland music promotion legend, described the pair:  “They weave their dark, modern spirituals from shared roots in magic, ‘mericana, and metaphysics.  Mister Baker, like Robert Johnson before him, may have made a deal with the devil — channeling an innate genius through lap steel, slide and dobro.  Missi’s earthy voice brings burning intensity to each song. Picture them sitting knee-to-knee on a Southern Delta, watching the dark moon rise and singing from their eternal souls.”

With their international reputations as true blues stars, Kim Field and the Perfect Gentleman are sure to quickly establish themselves as one of the Pacific Northwest’s premier R&B acts.

Sirens Of Soul And Blues