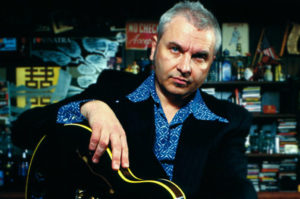 Former Portland resident and Delta Groove recording artist, Franck Goldwasser aka Paris Slim will be heading back north for a spring tour of Oregon that will be making stops at numerous venues and featuring special guests along the way. Paris Slim, without doubt, is one of the finest and most creative guitarists internationally who has a handful of critically-acclaimed solo recording and a WC Handy Award (Blues Music Award) nomination for his disc Blues For Esther. Since moving to the United States from France in the 1980s, Paris Slim has been a mainstay of the West Coast blues scene working with artists such as Jimmy McCracklin, Troyce Key, Curtis Salgado, Alastair Greene and The Mannish Boys.

The tour will all begin on Friday, March 31 when Paris Slim will be joined by bassist John Mazzocco and drummer Brian Foxworth as he appears at Duff’s Garage, 2530 NE 82nd, in Portland. Contact the venue for admission information at 503-234-2337.

The trio will then be appearing the next night, Saturday, April 1 in Hood River for a show presented by Squrl at The Pines Tasting Room, 202 Cascade Avenue. Admission for this 7:00 pm performance is $20.00 and can be purchased in advance at the venue.

On Monday, April 3, Paris Slim will be joining Lloyd Jones at The Muddy Rudder for Lloyd’s regular acoustic showcase. Located at 8105 SE 7th in the Sellwood neighborhood, this is a free event, beginning at 8:00 pm.

Then, on Saturday, April 8, Paris Slim will be appearing in Eugene alongside Henry Cooper at Mac’s At The Vet’s Club, 1626 Willamette Street. Show time is 8:00 pm, contact the venue for admission information at 541-344-8600.

The Lady Sings the Blues, and Jazz Too