A Love So Strong
Self Produced 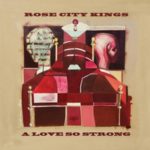 A Love So Strong represents the return of the Rose City Kings after a hiatus of several years after band leader Dan Berkery decided to step away from music for a little while.  Always an exceptional songwriter with a knack for catchy, sing-along, and danceable tunes, Berkery steps right back into the fold with a new collection of material every bit as fun and exciting as before.

The revised band includes some old friends and newer members, but they’re all right in line with Berkery’s mindset. Well-known local players like keyboardist Steve Kerin, harmonica ace David Lipkind, bass man Tim Shaughnessy, Blues Music Award winner Jimi Bott, trumpet player Joe McCarthy, conga player Heidi Shuler, and vocalist Katy Oberg are amongst this star-studded cast behind the music here. This diverse grouping brings a lot of history and different approaches to the format. The recording were laid down at Jimi Bott’s Roseleaf Studios, with all but three tracks penned by Berkery.

There’s a lot of kick behind these numbers and right off the bat you’re going to hear the strong impact that Lipkind provides with his harp. Also front and center is the voice of Oberg, whether teaming alongside Berkery on a piece like “All Your Love” or taking the lead on her own as she does in “Working Girl Blues” where Steve Kerin and Berkery offer some exceptional accompaniment.

The title track “A Love So Strong” is classic Berkery at his best. With his soaring vocals and lyrics that invite you to join in on the chorus. The group throws down a funky little jazz instrumental on “Superbee” where several musicians get a bit of spotlight. “A Sight To See” brings a little flavor of Louisiana to the mix, with Steve Kerin working the accordion and harmonies from the band. There is a bit of humor as Berkery sings about being knocked out by the girl with the “Love Karate Chop” who grabbed his full attention with such ease and gained his attraction beyond his own belief. The album closes out with another fun number titeld “Nah Nah Nah” where the storyteller speaks about the women he has known, lounge-like backing from Kerin, Shaughnessy and Bott stand out nicely.

This is a welcome return from the Rose City Kings, one of Portland’s favorite bands from the past who should step right back into place from where they left off. With a recording like “A Love So Strong” it should be an easy step. Very much recommended. 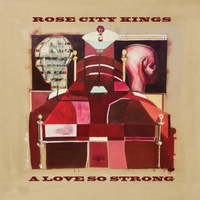