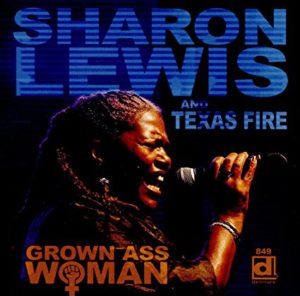 When you think about the Chicago blues women singers, there is an image that come immediately to mind — the full powered voices of people like Koko Taylor, Zora Young, Demetria Taylor, or Shemekia Copeland (yeah, I know Shemekia is originally from New York, but she stills presents a Chicago style when she sings). That is exactly what you get from Sharon Lewis, too. But her presentation is more than just a shouter, she has a lot of soulfulness and can bring forth a tenderness in her voice that is every bit of pleasing to hear, too.

Playing behind Lewis is a stellar band, Texas Fire, with guitarist Steve Bramer making significant contributions not only with his instrument but with songwriting, too. Keyboard whiz Roosevelt Purifoy tears things up throughout the recording and sure-fire and steady rhythm comes from bassist Andre Howard and drummer Tony Dale. Guest artists appearing have Sugar Blue blowing harp on a couple numbers, Joanna Connor’s burning slide work on a couple others, Carey Bell’s son Steve Bell showing that he caught his father’s legacy on harmonica, and Kenny Anderson playing trumpet and writing horn arrangements.

If you had any questions about Chicago’s continued legitimacy as the blues capitol, Lewis flat out tells you there’s nothing to deny about it in the opening track “Can’t Do It Like We Do.” And she lays down proof to the claim by calling off names of those who keep it alive: Billy Branch, Mike Wheeler and Nellie Travis. A great way to start off the album and she carries it on throughout, wanting you to shout out “Hell Yeah!” if you agree; certainly a number that is sure to get an audience frenzied.

But Lewis explores other topics than just her city. “Freedom” is a political statement. “Freedom cannot be freedom until freedom means freedom for everyone.” On “They’re Lying” she tells us not to listen to people who gossip, they’re just spreading falsehoods that hurt. Then on “Old Man’s Baby” she speaks about how an older man will take care of her and be more truthful than a younger man: “I’d rather be an old man’s baby than a young man’s fool.” The songwriting on Grown Ass Woman is strong on every selection.

Lewis closes the album with two covers that are smartly done. Bramer’s guitar is biting and Lewis’ voice growls on a funky reading of BB King’s “Why I Sing The Blues” and The Allman Brothers’ “Soul Shine” is a terrific way to draw everything to a close in a positive and tender way.

With Grown Ass Woman, Sharon Lewis has declared that she is the new force of nature to reckon with when it comes to Chicago vocalists. Listening to this album should leave little doubt to that. Outstanding. 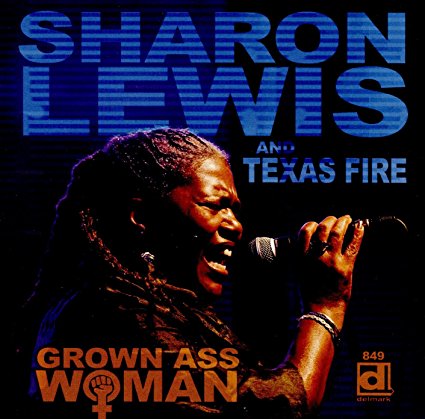