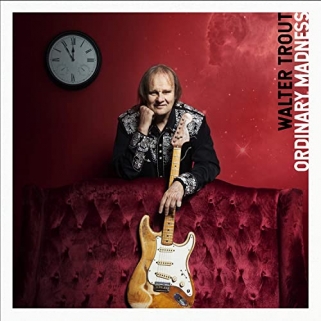 A veteran of Canned Heat, John Mayall’s Bluesbreakers, and Percy Mayfield’s band, Trout’s revered spot in the blues and blues/rock universe is secure, and though he’s now nearing 70, Trout’s lost none of his potency, either as a guitar player or blues singer. His songwriting still sits top shelf, as several of the tunes on this album evince. For me, the title track, “Ordinary Madness” is the highlight. A dark, moody meditation on the perils of the mundane misery lurking within all of us. Perhaps it’s the general craziness of this time, but if we need an anthem for the ubiquitous anxiety that surrounds us all, we’ve found one. Trout sings of the “sadness and the anger and the fear / that you feel everyday” and that “just lays there in your gut / and it won’t go away.” When Trout combines these lyrics with his wickedly ethereal rifts it’s as if his guitar becomes both the cause of and the cure for this pain — offering salvation with one hand, but then snatching it away with the other. It’s one of the most compelling and toughest tunes I’ve heard in quite some time, and alone is worth the cost of admission.

But of course, there’s more. The rest of the album shines as well as Trout examines life and loss through tune like the tough, straight-ahead blues rock of “Final Curtain Call” and “OK Boomers” and the subtle reflections in the ballad “My Foolish Pride.” It’s unusual for an album with this degree of punch and force to also contain a bucketful of understated grace and humanity. But then, that’s The Blues, isn’t it? Highly Recommended

Vanessa Collier – Heart On The Line

Ramblings On My Mind – October 2020
Scroll to top