The Cascade Blues Association in partnership with Artichoke Music, brings the July edition of our Monthly Blues Meeting on Wednesday, July 7th the Livestream is at 7pm on the Artichoke Facebook Page. 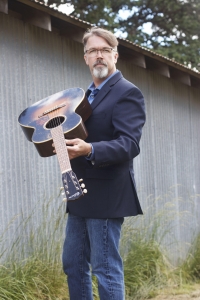 Adam Scramstad is an award winning Solo Acoustic Finger-style & Blues Musician, born and raised in Oregon. Scramstad’s repertoire covers a broad range of early American Folk, Blues artists’ work, although he is primarily known as a strong and creative songwriter in his own-right. Adam’s debut Solo album “No Sun Around Blues” climbed to #33 on the Roots Music Radio Blues Chart. December 2020 marked the highly anticipated release of Scramstad’s new album “It’s a Long Way to Go”. From CBA President Greg Johnson’s January Blues Notes Review: “It has been a long time since his 2006 debut release, No Sun Around Blues, but rest assured he has not been idle during those years. Working on his music and playing with friends, he has put together a new disc that proves he is an artist ready for worldwide attention. That disc, It’s a Long Way to Go, easily stands among the absolute best acoustic blues and Americana releases. Simply said, it’s that good and more.” Although he maintains a focus on Solo Acoustic Delta Slide & Country Blues, Adam is also known for his work with Blues Guitar Legend Terry Robb as an acoustic duo. You can hear Adam’s electric guitar work throughout the Terry Robb Band releases “Muddyvishnu” & “Confessin’ My Dues”.

“He plays a driving kind of solo acoustic blues reminiscent of another Oregonian, the late John Fahey” – “guitar playing is quite good throughout, clean and acoustic” – Gary Whitehouse, The Green Man Review

“Adam Scramstad, an insanely talented delta/country bluesman that shouldn’t need an introduction.” – “Adam’s beautiful and humanistic playing pops up now and again as I endlessly scroll through repetitive memes, and I always stop and take a listen” – Corvallis Advocate