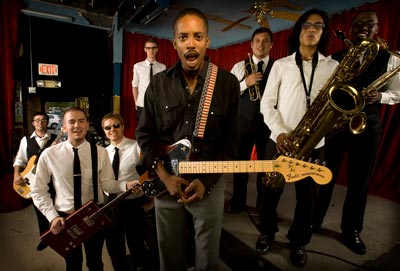 Anatomy texts might not show it, but the greatest soul and blues music leaves no doubt that the hip bone is directly connected to the heart. A fact that’s driven home in every note laid down by Austin’s Black Joe Lewis and the Honeybears with their kind of gritty attitude and deliciously greasy groove–consciousness that’d pass muster in the toughest juke joint. 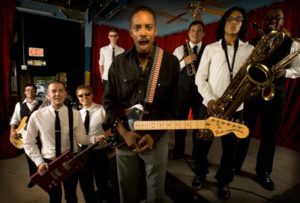 With a voice that’s one part Joe Tex and one part Tyrone Davis, Lewis is a songwriter who creates his music naturally and cites James Brown and Lightnin’ Hopkins as two of his greatest influences. The Honeybears is one of those outfits that can communicate without speaking and their flow is showcased by their performances on stage. “Lewis has an amazing ability to just draw people in,” states Honeybears guitarist Zach Ernst. “For a lot of people, the blues is a museum piece, but Joe brings it into the moment.”

Touring in support of their recently released disc, Backlash, Black Joe Lewis and the Honeybears will perform at Mississippi Studios, 3939 N Mississippi Avenue, on Sunday, April 9 at 9:00 pm. Tickets are $16.00 advance through Ticketfly.com or $18.00 day of show at the door. Opening the show will be Vampire Weekend drummer Chris Tomson’s solo project Dams of the West.