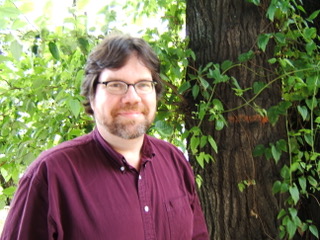 An Oregon native, Randy’s been a fan of blues since his high school years, but his interest piqued in 1982, when he heard Albert Collins playing in a dive in Ashland. Many years later he picked up a copy of BluesNotes at Music Millennium, and that prompted him, in March 2014, to become a member of the CBA. He first volunteered for events during the 2014 Waterfront Festival, and then in January 2015 began to write for and edit BluesNotes. In March 2017 he joined the CBA board of directors. Randy’s paying gig is teaching literature and writing at Clackamas Community College.

The past several years have seen a nearly complete turnover of the board, and amazingly, Randy’s now its longest tenured at-large member. During his time on the board, apart from his work on publishing BluesNotes, he’s helped enroll the CBA in the Nonprofit Association of Oregon and worked to stabilize the CBA’s financial position.

Blues Nights – Lovejoy Rooftop at the Botanist
Scroll to top