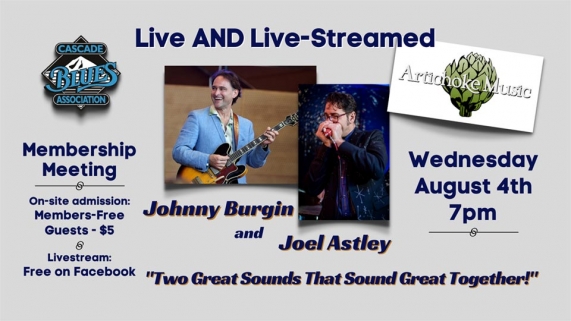 We are excited to host two incredible musicians from out of town: Guitarist Johnny Burgin, returning to Portland from time spent in NOLA and points east; and Seattle-based harpist Joel Astley, multi-award winner at the Washington Blues Society. Some may recognize Johnny’s Chicago sound, while others enjoyed Astley’s regular live stream art+music shows over the past year.

The Membership Meeting is going LIVE and IN-PERSON in August!

We’ll be live streaming the performance on Facebook PLUS up to 48 CBA members and friends can watch from inside Artichoke Music.

Doors will open to Members-only at 6:15pm. Pending available seating, both Members and Guests may enter after 6:45pm. First come, first seated. CBA members get in free and Guests pay just $5.

Johnny Burgin earns his name as The Worldwide West Side Guitar Man by performing up to 250 shows a year in Europe, Japan and coast to coast in the US.  Johnny grew up in Mississippi and went to University of Chicago at 18, but ended up attending “blues university”.  Johnny met a DJ on the college radio station who took him to see the Howlin’ Wolf-style singer Tail Dragger on the West Side of Chicago.  Tail Dragger took Johnny under his wing and gave him his first professional gigs, and from there Johnny learned quickly and went on to tour or gig with blues legends such as Pinetop Perkins, Sam Lay and Billy Boy Arnold.  He’s been praised by the Cascade Blues Association for his “stunning guitar playing– the pure Chicago styled sound”.

Johnny’s played on dozens of records as a sideman and as a leader, he’s released ten CDs on Delmark and Vizztone records.  His Johnny Burgin Live features special guests Charlie Musselwhite, Nancy Wright and Rae Gordon and debuted at #3 on the Living Blues Blues Radio Chart.  His latest effort No Border Blues: Japan came from Johnny’s many tours and long relationships in Japan and is the first American compilation of the underground Japanese blues scene.  Vintage Guitar stated: “Stellar fretwork, gloriously loose, earthy and immediate Chicago blues”.  Johnny and his blues partner Stephanie Tice host the No Border Blues podcast, the only blues podcast focused exclusively on international blues artists.  He was nominated for a BMA for Best Traditional Blues CD of 2017 for Howlin’ at Greaseland, a Howlin’ Wolf tribute, Best Live Recording in 2020 from Blues Blast magazine, and is up for three Independent Blues Awards in 2021.

“His guitar style is raw and rude and real– on the vocal side, a nice original style– he’s damn good!” –Elvin Bishop

Award winning singer, songwriter and harmonica player Joel Astley was a visual artist for 20 years before abruptly jumping headlong into music. Since starting his first band in 2014, he has been performing around The Pacific Northwest and beyond, and has quickly risen to local favorite. He has been recognized by the Washington Blues Society with several music awards including Best Blues Harmonica 2018-2021, Best Male Vocalist 2019 & 2021, Best Songwriter 2020-2021, and in 2020 released award-winning album Grit City with the T-town Aces. He currently leads Seattle-based High Note Group.

“Joel you can write, you can play harp, and boy can you sing.” – Leslie Fleury KSER Blues Odyssey DJ

Key Events and Save the Dates! July 2021