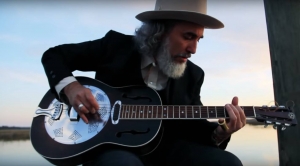 For our monthly blues performance, the Cascade Blues Association and Artichoke Music present Jody Carroll, a blues and roots performer and songwriter who effortlessly creates bold interpretations of old blues and American folk music, his own songs, stories and improvisational musical journeys. He is a finger style/slide guitar master and amazingly soulful singer, blending flavors of old blues, folk, mountain music, jazz and rock into a true, power-packed gumbo.

His music can be hypnotic and mind-bending with its original styles of acoustic roots guitar as a solo artist or leading the boundary-breaking band Woodbrain. Having performed across the country, in Europe and Japan, Jody has opened for and shared stages with the likes of Buddy Guy, Honeyboy Edwards, Jack Owen, Johnny Winter, RL Burnside, Shemekia Copeland, Sonny Landreth, John Mayall, Robert Cray, Charlie Musselwhite, Roy Book Binder and many others.

Twice Jody’s recordings were selected by the Cascade Blues Association to be entered into The Blues Foundation’s Best Self-Produced CD competition. The first, Rain of Days, made it to the final five in 2007. The second entry, Get Inside This House, won the overall competition in 2011. Judges were mesmerized by Jody’s authentic new approach that carried the acoustic blues into an exciting new territory, foregoing many stereotypical paths of the genre.

​Five years ago, Jody began living the life of a true troubadour, moving into a motorhome. He wanted to get to know America better and living it in order to write about it correctly. For a couple of years he landed in the Carolinas and lived the solitary life in his motorhome in the Blue Ridge Mountains. He began to woodshed and write new songs. A collection of his material from the last couple of years came together during the past year’s lockdown, which he recently released as the outstanding double-disc, World of Man.

Aside from music, Jody has also earned a master’s degree in fine arts and has taught painting and drawing at the university level. He has also lectured and presented concerts and private functions on American music. Subjects have included the works of Robert Johnson in a 101-year celebration and a two-part tribute to the ethnomusicologist Harry Smith and the impact of his highly admired collection, Anthology of American Folk Music.

This will be posted to YouTube the day after the show.

April 7th Member Drawings – How to WIN!!!
Scroll to top