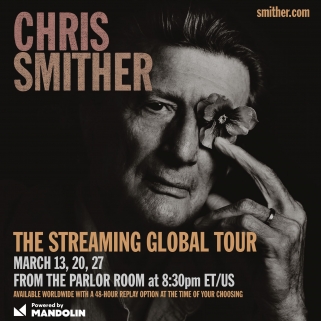 Acoustic guitar master Chris Smither fell in love with the sound of folk and blues music after hearing a recording by the legendary Lightnin’ Hopkins at an early age. He decided to make music his life’s career in his twenties in the mid-60s and has since released 18 highly acclaimed albums. A storytelling songwriter who music has been recorded by the likes of Bonnie Raitt (“Love Me Like A Man”), and has recorded and toured alongside people like BB King, Dave Alvin, Dr John, Nanci Griffith and more.

A true road-dog, Smither is normally constantly on the road performing, but as with every other musician he finds himself seeking other ways to showcase his talents. In March, he will be streaming three nights of music, including two performances and one master class. All three will be streamed live from The Parlor in Northampton, MA.

March 13 LEAVE THE LIGHT ON night – Chris will perform songs from the record in its entirety playing favorites like “Seems So Real,” “Origin of Species,” “Leave the Light On,” and other songs.

March 20 MASTER CLASS –  Chris will break down how he plays his song(s) and also provide some commentary on how the songs came about all in conversation with special guest Chris’s good friend songwriter/musician Peter Mulvey.

March 27 NIGHT of the BLUES – Chris will play a solid hour of his own and traditional blues.

Each event has a 48-hour replay window so folks in the Pacific Northwest, Australia, UK and EU you can watch at a time that works best for you and also anyone can re-watch the performances again (and again and again) in that window.

Alberta Rose Theatre is proud to partner with Chris Smither to bring you access to these special livestream performances.  Tickets are $20 and on sale now at albertarosetheatre.com.  A portion of each ticket sold benefits the Alberta Rose.