You are here: Home1 / Book Review2 / Dark Was the Night – Blind Willie Johnson’s Journey To The Stars... 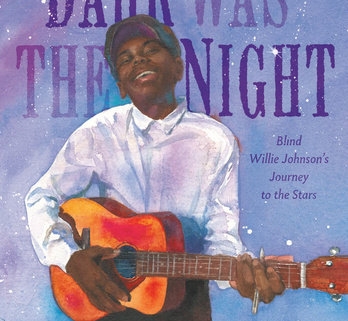 Dark Was The Night is the latest offering from Gary Golio, an award winning children’s book author who has penned several biographical titles, many involving musicians. Among his works are included the stories of Jimi Hendrix, Billie Holiday, Carlos Santana, Bob Dylan and John Coltrane.

Dark Was The Night is the story of early bluesman Blind Willie Johnson and how despite the devastation suffered early in his life with the loss of his parents and his sight, music turned his life around. He recorded during his lifetime, but by the time of his death he was fairly unknown. Yet, in 1977, when NASA sent the Voyager into space, it included a disc presenting numerous pieces of information to display life on the planet Earth in the event that any life-form came into contact in its mission. Several songs were included on the disc; one of which was Blind Willie Johnson’s “Dark Was The Night.”

This book is beautifully illustrated by EB Lewis, whose works have adorned more than 70 books and has been recognized with a multitude of awards. Her artwork, along with Golio’s easy reading storyline compliments one another in this very well presented story of a musician worthy of more recognition and a human story perfect for reciting to children and adults alike.

Blues in the Gorge Now An Online Camp
Scroll to top