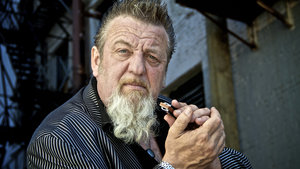 Canada’s award winning classic bluesman, Harpdog Brown was last seen in Portland at Waterfront Blues Festival, but now he’s back to cure our holiday hangovers and he’s bringing his incredible Uptown Blues Band along for the ride. His new album, For Love and Money, is a little bit Chicago and a lotta New Orleans with a terrific piano-driven blues vibe that features great horn players. It’s guaranteed to lift you up.

Harpdog Brown has grown a reputation as a real-deal purveyor of classic electric blues. He’s been called a Blues Evangelist, and that’s a very fitting moniker. “I speak the blues like it’s the truth, and it is”, he recently explained. “I do feel like I’m a servant of the people. A missionary if you will. Music can heal people if they pay attention to the messages in these songs.” He delivers those messages using the vintage sound whether it be with his lowdown classic blues band the Travelin’ Blues Show or with his Uptown Blues Band.