You are here: Home1 / Journey to Memphis2 / Journey To Memphis Winners Selected

The finals for this year’s Journey to Memphis competition were held on July 4 at the Waterfront Blues Festival. Four strong acts, who had won the right to participate out of a field of fifteen original acts at Mekong Bistro in mid-May, brought out their best before the scoring judges and an enthusiastic crowd on the Front Porch Stage. 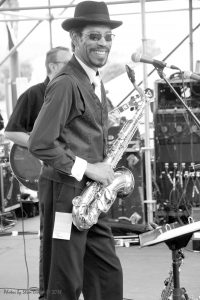 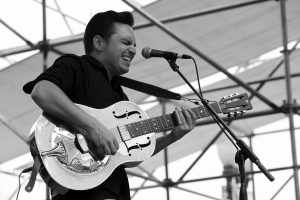 This year was unique in the fact that we had two bands, Fenix Project and Johnny Wheels & The Swamp Donkeys, and two solo/duo acts, Rae Gordon & Kivett Bednar and Ben Rice, vying for the right to go to Memphis in January. So it was guaranteed that one from each category would have that honor. Each delivered amazing sets, but when it was all over Ben Rice was named the overall winner of the event and will represent the Cascade Blues Association in the solo/duo category. The top band of the day was the Fenix Project who will also be heading to Memphis to compete in the band category.

Thanks to our finals judges, Chris Azorr, Kendra Carpenter, Michael Bard and Tony TC Coleman. This is a very tough job having to score each act individually in blues content, vocals, instrumentation, originality and stage presence, without trying to compare one act against the other.

Congratulations to the winners and all those who competed!! Good luck in Memphis. Watch for upcoming events to help these acts raise funds to defray travel costs.