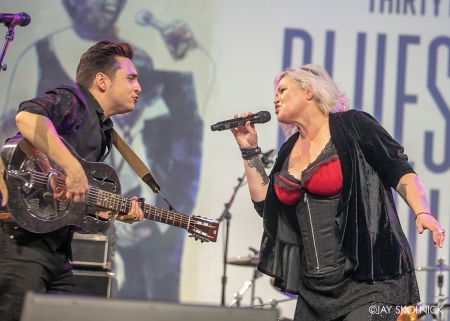 For our monthly blues performance, the Cascade Blues Association along with Artichoke Music present two of the most beloved artists on Portland’s music scene, Karen Lovely and Ben Rice. Both rose to fame representing the Cascade Blues Association at the prestigious International Blues Challenge in Memphis, TN and have gone on to tour the world as in-demand performers and have each garnered multiple award recognitions.

Vocalist Karen Lovely traveled to the International Blues Challenge in 2010 after winning the Cascade Blues Association’s Journey to Memphis. She took Beale Street by storm taking second place overall in the competition that brings musicians from around the world. That win brought huge attention that has not lapsed, with four Blues Music Award nominations, three Blues Blast Award nominations, and multiple Muddy Award nominations and wins. Six recordings, including stand-out releases Still The Rain, Ten Miles of Bad Road, and Fish Outta Water, have all received high critical acclaim through outlets like Downbeat, Living Blues, Roots Music Report and Billboard.

Those following the Oregon blues scene have literally watched Ben Rice come up as a musical prodigy since his early teens. As a guitarist, vocalist, songwriter and band leader, he has all the skills needed to carry him on a continual path to great heights. Rice also represented the Cascade Blues Association at the International Blues Challenge, the first time in 2008 with his band The Youth of Blues. He has been two more times since, making the band finals representing the Cascade Blues Association and as a solo/duo performer with Lucy Hammond representing the Ashland Blues Society when he also took home the St Blues Cigar Box Award for best guitarist. Rice had won the honor to represent the Cascade Blues Association again in 2019, but his recording Wish the World Away was nominated for three Blues Music Awards, thus making him ineligible to compete furthermore in the event. He has won the Blues Blast Sean Costello Rising Star Award and has a multitude of Muddy Awards from over the years, including induction into the Muddy Award Hall of Fame.

Karen Lovely and Ben Rice have worked together numerous times over the years including touring to locations in Europe and across the country in both band and duo formats. There’s a little magice that happens when these two come together onstage and it’s obvious how much they enjoy working with one another from their ever-present smiles (though you may not see this with masks worn due to Covid, you just know they’re there).