Plan on joining us at The Eagles Lodge for our monthly General Membership Meeting where you are guaranteed to find some fun times with two sets of blues, a bunch of fun give-aways for our lucky ticket drawings, and good times with special friends. This month we have two acts that we know you’re going to love, so come on out and check them out. 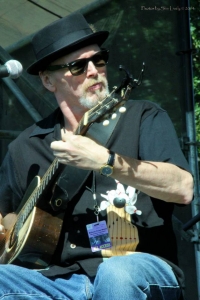 A professional musician for close to 40 years, Thad Beckman has paid his dues on the dusty roads which run from Oregon to California to New Jersey to Texas to Amsterdam to Vienna and points in between. His finely-crafted original songs are the story of life, the voice of modern America…from the growling Delta blues of the Deep South to evocative contemporary folk blues…bound by the common thread of experience gleaned from the road.

Thad Beckman, is a prolific songwriter, having written and produced seven solo albums, whom Tom Russel as called, “One of America’s best guitar players and a damn good songwriter” As a guitarist, Thad Beckman has been hired by Bo Diddley, The Shirelles, Earl Thomas, Tom Russell, and as a bandleader has found himself sharing the stage with such renowned artists as B.B. King, Albert Collins, James Cotton, The Band, Emmylou Harris, The Fabulous Thunderbirds, Dan Hicks and the Hot Licks, Los Lobos, Dave Alvin, Jimmy Webb, and The Flatlanders to name a few. Thad has also appeared on The Late Show with David Letterman playing guitar for Tom Russell.

Founded by guitarist and band leader Josh Makosky and his high school best friend Rich Staats, Love Sloth is a

mutation of their original band August In Blue. Makosky has been playing music since he was five, starting on piano and picking up guitar when he was ten. He studied music at a local community college and a few years later with a desire to play for more than just his friends, he began hitting jams around town and fell in love with the local blues scene. Finding a  calling for the blues he started playing regularly with musicians such as Angel Bouchet and Lucy Hammond, then touring with American Idol favorite and super-diva Naomi Tstsuoka and also with his friend, the award-winning Ben Rice.

Although founded as primarily a blues-rock band, Love Sloth, with its own sound has been crafted from many styles, blending the genres of blues and R&B, funk and high-energy rock. Through several line-up changes, the band released their debut recording 2017. Staats ended up moving to Arizona, leaving a vacuum within the group which was filled by Nathan Mayers taking on the second guitar position, with the band rounded out by the amazingly talented Juliet Terrill on bass and Chandler Bowerman holding it all together on drums.

Live onstage is where this band shines. They have a belief in writing fun, relatable songs and strive at delivering a fun and energetic musical experience that will make their audiences want to see them again and again.

Applications Now Being Accepted For 2020 Journey To Memphis