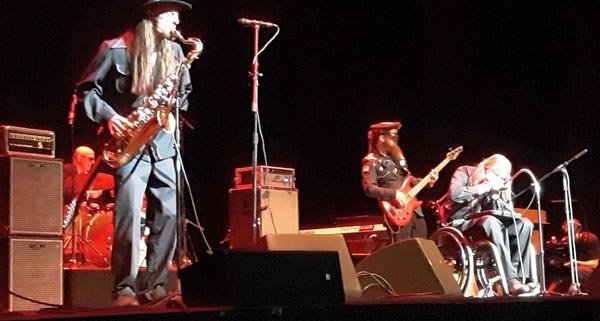 This rookie’s first Journey To Memphis was a whirlwind of preparation, travel, showcases, jams, performances, and eateries — all topped off with lack of sleep. I was lucky to be traveling with IBC ‘veterans’ so I had plenty of advice on how to navigate my week on Beale Street, starting with “you simply can’t see it all.” And that’s the truth! With over 200 bands and musicians performing in 17 different venues over four days, 10,000 steps a day was easy while crisscrossing Beale Street trying to catch every act I wanted to see. These included the CBA’s own entries: Generation Headstrong in the Youth Showcase, Louis Creed and the Geezer in the Solo/Duo category, and Johnny Wheels and the Swamp Donkeys (JW/SD) competing with other bands.

Although I also wanted to see other artists who’d previously played Portland, including Duffy Bishop, Blue Moon Marquee, and JW Jones (in HOROJO Trio), not to mention showcases and jams with local favorites, it wasn’t possible to be everywhere I wanted to be.

All competitors performed twice during the quarterfinals on Wednesday and Thursday. By the second day there was buzz about JW/SD, and bodies were packed right out to the street wanting to check out this powerhouse band! Late that night they announced the Donkeys made it to the semi-finals and we all celebrated well into the wee hours.

Friday we learned when and where JW/SD were playing that evening. Meanwhile the Youth Showcase took place early evening across 12 different venues. Generation Headstrong had an early slot and did a great job on stage, building on all they learned in workshops that week. The audience loved their set, especially their covers of Zeppelin’s “Rock and Roll” and “Walking the Dog”!

Even at the larger venue, Johnny and the Donkeys had the place packed inside and out, receiving standing ovations for their out-of-the-ballpark set. Nobody was really surprised when they announced JW/SD were among the eight bands going to the finals at the Orpheum on Saturday — but everyone sure was thrilled!

JW/SD were the first band to play on the Orpheum stage Saturday. They rocked a slightly shorter set to keep within their time slot. All these bands and solo/duo acts were the best of the IBCs and so much talent crossed that stage, but it was nerve racking to wait through 14 more performances and an All Star Showcase before knowing the result!

Finally Blues Foundation President Barbara Newman took the stage to announce the winners. In the band category, HOROJO Trio (with JW Jones, who also won the Gibson Guitarist Award) from Ottawa took first place, the Jose Ramirez Band from D.C. was second, and the Pitbull of Blues Band out of Florida came third.

In the Solo/Duo category, Hector Anchondo from Omaha won first place, and also the Memphis Cigar Box Award. Felix Slim from Long Island took second place and won the Lee Oskar Harmonica Award.  Our own Rich Layton was short-listed for Best Self-Produced CD, however Sweet Thing Moonshine Society out of Virginia won in that category.  Congratulations to ALL the bands that made it to the finals! If it was difficult for me to narrow down the best beyond the top four or five, I can only imagine how difficult it was for the judges!