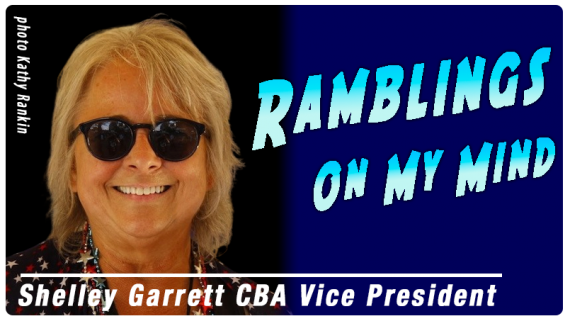 Ramblings on My Mind June 2021

There’s a lot of news to share this month as summer heats up!

The 2021 version of the Waterfront Blues Festival “Upriver,” July 2-5, has been announced, and tickets are on sale to the general public as of June 1. It’s a very diverse lineup that has me excited to find new bands and collaborations to love as well as revisiting some old favorites. Be sure to get the most updated information here: http://www.waterfrontbluesfest.com/

With COVID restrictions and space restraints, the CBA may not be able to have a merchandise booth this year. We normally have the BluesNotes to hand out, but we no longer have the funds to do a print version. Plan B: We are hoping to have a special edition of a Festival Flyer to let everyone know about the CBA and the local blues community. In the past, this event has garnered our highest membership signups, so we will be including a reminder for people to sign up! Once we have firmed things up, we will probably be looking for advertisers and sponsorships. Watch our Facebook group for updates.

Johnny Rawls is a soul-blues legend. In fact, the term “soul blues” was invented to describe his music. With a career spanning more than 50 years, he’s done it all. He’s an internationally recognized recording artist, music producer and songwriter who tours extensively throughout North America and overseas.

The Blues Music Awards, Blues Blast Awards, Living Blues Critics Poll Awards and the W. C. Handy Awards have all acknowledged Johnny with multiple awards and nominations, including Soul Blues Album of the Year and Soul Blues Artist of the Year. Johnny is honored to be mentioned on two markers along the Mississippi Blues Trail.

Hosting Johnny for this return WBF engagement will be a cadre of Rose City all-stars, several of whom backed Rawls previously not only at Waterfront in 2019 but also on gigs in the Mississippi Delta: Ben Rice, guitar; Dave Fleschner, keys; Dave Melyan, drums; Lisa Mann, bass; and Devin Phillips, sax. Hear Johnny at http://www.waterfrontbluesfest.com/2021-additional-artists/johnnyrawls/

Tony Coleman’s Three Kings Portland-based Tony Coleman is one of the most revered blues drummers in the world today. During his illustrious career, he has toured the world with Otis Clay, Bobby Blue Bland, Johnnie Taylor, Albert King, Albert Collins, Etta James, Freddie King, James Cotton, Katie Webster, Z.Z. Hill, O.V. Wright, Buddy Guy, and BB King, with whom he performed and recorded for 29 years until BB’s death in 2015.

Joining Coleman on this tribute is an impressive lineup of the region’s blues all-stars. Contributing Three Kings-inspired guitar work will be Mike Osborn (longtime guitarist with John Lee Hooker), Peter Dammann (Paul deLay, Linda Hornbuckle, Solomon Burke), and Franck ‘Paris Slim’ Goldwasser (Charlie Musselwhite, Percy Mayfield, Lowell Fulson, Jimmy McCracklin). For Goldwasser, who lived and performed in the Portland area for several years before relocating a few years ago to California, this will be a final U.S. appearance before moving back to Germany.

Members, please check your June email blast for an opportunity to win a “seating pod!”

We WILL hold the Journey to Memphis competition this year. Members should look for a special email the first week of June with all of the details — and please note: there are changes!

Please welcome Robert Evans to the CBA Board of Directors as an at-large member.  Read about Robert in the announcement from Secretary Marie Walters in the member email blast.

The Virtual BMAs (Blues Music Awards) will be live streamed in June. Marie has all of the details on how to buy tickets. Check this out in the “features” section.

Save these dates—these are all planned to be in-person events! See the calendar for lineups!

There is a real possibility of having in-person meetings soon!

We are always looking for more volunteers to help with the Blues Notes, especially if you can do at least one CD review a month.

A reminder that CBA President Greg Johnson will have a long road to recovery both from cancer, and now from a severe stroke. If you are able to help, the GoFundMe link is https://gofund.me/19a001b2

Save the Date – The International Blues Challenge #37