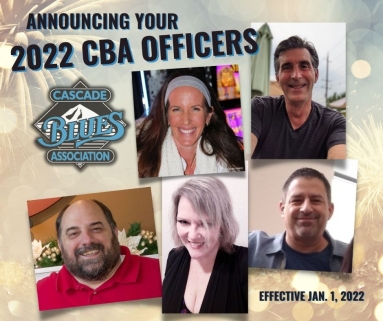 The 2022 CBA officers election results are:

Congratulations Anni Piper, our president-elect, and Nolan Johnson, our vice president-elect!
Our three incumbents who ran uncontested, Mike Day, Mike Todd and Marie Walters, were confirmed in their respective positions, and the By-Laws amendments were ratified as well.
This election was a true contest. James Thornton and Robert Umali Evans were strong contenders, garnering 40% and 45% of valid votes.
A reminder that the current officers’ term doesn’t end until December 31st and the elected terms begin January 1st.  Our first board meeting is scheduled for January 11th.
Thank you to our members who participated in this election process. As we head into a new year and a new term, we look forward to an exciting year of supporting blues music, and working together on new initiatives, collaboration, growth ….. and celebrating all those who’ve contributed to keeping the blues alive!
https://cascadebluesassociation.org/wp-content/uploads/2021/12/2022-CBA-OFFICERS.jpg 788 940 Buko https://cascadebluesassociation.org/wp-content/uploads/2020/10/CBA_Logo_top_main.png Buko2021-12-21 13:31:022022-01-01 16:57:08The 2022 CBA officers election results are