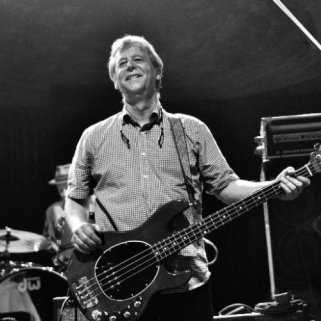 On Sunday, July 11th, one of the most poignant, touching tributes took place at the Wooden Shoe Tulip Farm near Woodburn; a celebration of the the life of Tim Shaughnessy: bass player, businessman, husband, father, and a friend to nearly everybody who met him. If you’re one of the few who didn’t know him by name, you probably knew him for his work with the Rose City Kings and Too Loose Zydeco Cajun Band. You might have even known him, indirectly, if you ever witnessed or participated in any event related to the Mysti Krewe of Nimbus (the annual Mardi Gras Ball, parades, parties, crawfish boils) or the Stumptown Soul Holiday Spectacular. If you did know Tim, then you knew that he was remarkably intelligent, organized, hardworking, passionate, and generous with his gifts.

Tim was one of the rare few who knew the importance of shared effort and how selfless acts could lead to much greater things. His knowledge and commitment to the benefits and business of CBD led to helping, literally, thousands of people, including some who might be considered erstwhile competitors. For Tim, the mission was the message. As was repeatedly mentioned by friends, he resisted the limelight, though, once on stage, he could be a ham; the important thing was that he was part of the band. Tim had a special way of playing the focus with humility and grace.

Tim’s impact was – is – so profound that it’s difficult not to make this personal, so now is as good a time as any to cross that line. My own relationship with Tim spanned several areas of mutual interest, though CBD and music held the strongest sway. When he asked me if I might cover bass duties for a Too Loose gig, I easily said yes because, well, it was Tim. My first experience with the band was at the Shaughnessy house, with Tim working on a project in the dining room, behind me, giving me pointers on each song as it was called. When I was asked to help send him off, I inadvertently found myself sitting in that same spot, impulsively turning to him, though now he was lying in bed, while we “rehearsed”, one more time. I had promised Tim that, whatever and whenever he might ask, I would maintain the position of being his placeholder; this time, I hoped for the miracle that would make it so. After all, Tim was the Unicorn, whose meaning includes the opening of infinite possibilities, the ability to see them and the wisdom to take advantage of them.

For 13 months, Tim fought against incredible odds, following an industrial accident, causing traumatic brain injury (TBI) and requiring a life flight that he was not expected to survive. The love and support he received from friends and family was proportionally Karmic and his return home was, to put it mildly, serendipitous. When, at last, the writing was on the wall, five days were given to his farewell party that included a veritable who’s who of musical talent, a testament to the man and his profound, positive impact on the world around him.

In her last post after the memorial. Tim’s widow, Julia, related how several friends told her about a dragonfly that circled the gathering, strongly present when guest speakers shared stories of Tim. A friend sent a text about the significance of the dragonfly:

“In almost every part of the world, the Dragonfly symbolizes cut, transformation, adaptability, and self-realization. The change that is often referred to has its source in mental and emotional maturity and understanding the deeper meaning of life…”

Since we’ve already gone into more personal territory, it seems fitting that the words of others – musicians and band mates – will serve to drive home the point – that Tim Shaughnessy, a remarkably special person, has now us left a huge hole in our collective heart.

“I first met Tim when I was on the road with Rose City Kings in 2006. Right off the bat, he struck me as a really positive fella that was really easy to get along with. Soon thereafter, my relationship with Tim and Julia expanded as we started playing in the Too Loose Cajun and Zydeco band together. He was always someone who was interested in bringing people together, and he was always on the lookout for new and interesting ideas to pursue. For Jane-Clair and I, one of the most special collaborations with Tim was the Mysti Krewe of Nimbus, which has become like a family to so many of us up here in the Northwest. I consider myself to be grateful to be one of his friends. Tim, Julia, and the rest of that family are some of the best people that I have met since I moved up here.” – Steve Kerin

“Every gathering with Tim felt like the deliriously happy final scene from the film It’s A Wonderful Life.

With that big smile, anyone could tell his was, indeed, a wonderful life.” – Karen Lovely

“Without question or argument, uniquely the best of the best.” – Mark Bowden

“Tim Shaughnessy is one of those people that no one has ever said a bad word about. A real good egg, as they say.” – Lisa Mann

“He helped me fix up my first house, he taught me the right way to hang sheetrock and recycle good old straight-grain wood. Taught me how to stay positive against impossible odds. How to use Craigslist. He helped build Mississippi Studios. Helped me through a divorce. Played bass in my band. Tim is a perfect man, model husband and father. If we could all be just 1% more like Tim, the world would be a better place… I miss him, and it pains me that he’s gone.” – Jim Brunberg

“I can’t remember ever seeing Tim when he wasn’t on top of the world- no matter what he was doing. He was the embodiment of positive joy. My lasting image though, is of him on stage feet apart as if he was standing on a rolling ship with his bass in hand and a shit eating grin on his face as he did what he loved best- playing music. His absence jars me daily, but I feel his presence all around us.” – Robert “Lefty” Head

“Tim was one of the first people I met in Portland through my Bay Area friend Jim Brunberg. At the time I was a pretty brash and forceful person. Tim showed through his example that “gentle” was a more powerful and sustainable way to do things. I will be forever indebted to him for that. Tim literally changed my life. Now it’s my turn to live that example as he did.” – Dan Berkery

Ramblings on My Mind August 2021
Scroll to top