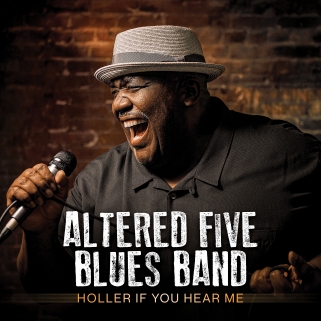 You might think volunteering for your local blues society would be all sassafras and tedium. However, that would be terribly misguided as there are perks involved, including being the first to hear great new music like this.

“Holler If You Hear Me” is the sixth studio offering from the Altered Five Blues Band, featuring 13 original tracks penned by guitarist Jeff Schroedl. The title track opens this release, and keyboardist Raymond Tevich lets you know you’re going to church. Quickly you realize, with the addition of wailing harmonica from special guest Jason Ricci, that the service is being held in a sawdust-strewn roadhouse.

Frontman Jeff Taylor plays the exuberant preacher and repentant sinner in equal measure. His commanding vocal presence draws your attention to the snappy storytelling in the lyrics. This is a collection of lyrical bluesman’s tales, each track an unglorified depiction of a life lived hard and fast – drinking, smoking and chasing women.

It’s more sophisticated than the “Got my whiskey, got my gin, come on now baby won’t you let me in” school of lyric writing. For example there’s more modern and relatable lines like “I got Ketel One and Keb Mo’ when I’m feeling low” in the moody “I Got All I Need.” Bassist Mark SOlveson and drummer Alan Arber drive solid grooves on booty shakers such as “Full Moon, Half Crazy” and “All Suit, No Soul.”

Masterful production from Tom Hambridge contributes to the success of this recording. The layering of instrumentation is never obtrusive. I love the way the guitar has been made to sound so close up and personal. This is achieved by using a lot of the sound from the small room the amplifier was placed in when recording. When this isn’t done correctly, it feels like getting stuck in a broom closet with the guitarist. But Hambridge shows just how to get it right, and there is such an intimacy created that I could be curled up on one end of my couch with guitarist Schroedl at the other.

Altered Five Blues Band has delivered a funky, contemporary blues album that’s both joyous and gritty. When are they coming to Portland?

Key Events and Save the Dates! September 2021
Scroll to top