The Cascade Blues Association in partnership with Artichoke Music, brings the June edition of our Monthly Blues Meeting on Wednesday, June 2. 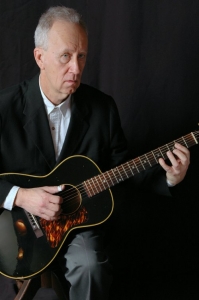 This month’s meeting will feature American Roots musician, James Clem. With over thirty years of playing down home roots music, he has performed in about every style of music in the genre. His main focus now is a mix of acoustic Delta blues, ragtime, vintage country and swing for which he has received worldwide acclaim. Calling the Pacific Northwest home, he has played throughout the region and has toured Europe several times. In addition to his soulful vocals and finger picking and slide guitar skills, Clem is also known as a premier ukulele player. He has played several festivals including the Seattle, Portland and Irish ukulele festivals and the London Ukulele Cabaret in England, as well as multiple blues guitar gigs in England, Belgium, France and Holland. Aside from performing, Clem also teaches guitar and has released three outstanding recordings, Stuff You Gotta Watch, Sugar Moon and Road’s Getting’ Muddy.

Inspired at a young age living in Los Angeles by the blues musicians he saw at the famed Ash Grove folk club, including artists like Bukka White, Lightnin’ Hopkins, Mance Lipscomb and Johnny Shines. Clem worked with local bands, The Spruell Brothers and Tobacco Road opening shows for local acts like The Blasters, John Hiatt, Rod Piazza and James Harmon. He even toured with renowned Detroit-based musician Chick Willis whose single “Stoop Down Baby” was a regional hit.

Clem eventually found himself favoring working as an acoustic artist, playing clubs in Los Angeles on acoustic guitar. One night he had an enamored fan approach him, he stated, “I just have to tell you that you are one of the best guitarists I’ve heard and I love what you are doing.” That fan turned out to be John Fogarty.

Please tip James during his performance at paypal.ce/JamesClemmusic