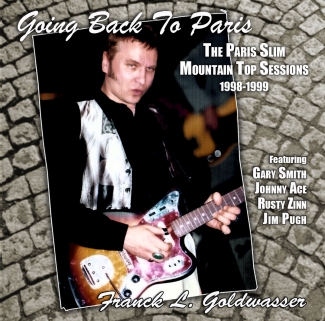 At the time that these tracks were laid down at Mountain Top in the late 1990s, Franck L Goldwasser, then going under the moniker Paris Slim, had already made a home for himself in the West Coast blues scene for 16 years. Encouraged by visiting blues men to his home in France, where he often found himself playing alongside the likes of Sonny Rhodes, he took their advice and traveled to California, landing in the very hot blues bed of Oakland. Over the course of the following years, he worked in bands fronted by people like Troyce Key, Percy Mayfield, Jimmy McCracklin and Lowell Fulson before taking on his own bands.

It’s really hard to believe that these recordings were kept on the shelf for the past 22-plus years. This is really spectacular music here as Franck is partnered alongside some amazing session musicians, including Rusty Zinn, Jimmy Pugh, Johnny Ace and Gary Smith, with a rhythm section of bassist Leonard Gill and drummer John Hanes rounding out the group.

The guitar work, especially the interplay between Zinn and Goldwasser is spot-on incredible. It’s this guitar playing that has proven Goldwasser one of the premier string benders going today. The song selections are crafty and well-chosen originals and covers, all done in an original flavor, making it speak in Franck’s voice altogether. And he just doesn’t showcase his guitar, he gives a stunning piece of harmonica playing on “Harp De Triomphe.”

If you like your guitar playing bluesy, you’re going to be hard-pressed to find anything as over-the-top as what is being offered here. This is exactly the type of blues that cemented Oakland and the Bay Area as a birthing ground for the West Coast’s absolute best. It is truly criminal that these recordings were held back for more than two decades. They’re every bit as essential now as they would’ve been then. Franck Goldwasser strikes gold with each and every track on this fantastic album. Cannot recommend it enough!