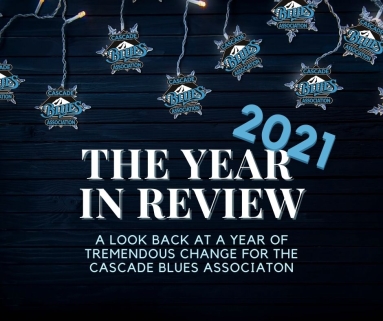 This was an unprecedented year for the Cascade Blues Association.

Greg Johnson, who had been CBA president since 2002, was diagnosed with cancer in March.  He was able to stay on in a limited capacity, until he suffered a stroke in May. His decades of service are not likely to be matched anytime soon. We give him our thanks.  If you are able to help with the GoFundMe, click here.

For me, I’m really glad I’m retired … the CBA became almost a full-time job! I was the 2021 elected vice president, interim treasurer for nine months, acting president for 11 months, the lead for the Waterfront Blues Festival flier, the Journey to Memphis Competition and the Mini Muddy Awards.  I was also part of the leadership team (along with Terry Currier and Joey Scruggs) for the “Blues for Slim Lively” October benefit for Greg at the Crystal Ballroom, managed the Blues Notes, designed and sent the email blast, was the website liaison, took care of the online store and ran the board meetings.

Some of our accomplishments this year include paying acts to play at our monthly membership meetings (started in August) increased member giveaways for CDs and  concert tickets, renewed support for the Good in the Hood online festival, continued partnership with the Cider Festival (virtual this year) increased co-sponsorships and website ad revenue, instituted a “futures” article to assist members in purchasing concert and event tickets before they sell out (big thanks to Mike and Debra Penk for helping with this!), continued liaison with the Cathedral Park Jazz Festival blues night and continued the successful partnership with Artichoke Music, which provided performers with high-quality video on YouTube. We built a partnership with the Lovejoy Rooftop at the Botanist supporting Elevate Unity and put on several successful shows there, again providing paying gigs for local musicians.

For the future … the long-discussed planning committees held their first meetings to identify projects — thank you to Brad Bleidt for leading this. And we rewrote the CBA mission statement — thanks to Randy Murphy for his research and guidance.

For the first time in decades, the membership elected a new president, Anni Piper, and new vice president, Nolan Johnson. Please support them as they learn their new roles!

The entire board thanks our paying members for hanging in there as we navigated our new normal!