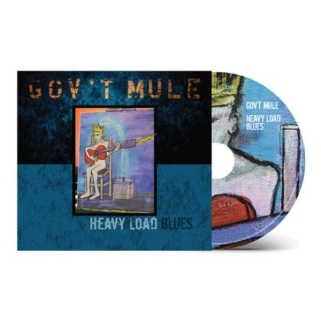 From their first live show at Rivalry’s on Cherry in Macon, Ga., on June 11, 1994, Gov’t Mule peppered their first set list of 13 songs with four tunes by the blues originals from Memphis Slim, Willie Dixon, Elmore James and Muddy Waters.

Twenty-seven years later, Gov’t Mule has released 12 studio discs and 10 live discs along with more than 1 million downloads of band recordings of their live shows called “MULETRACKS” through their www.MULE.net website.

Gov’t Mule’s original lineup was a power trio with Warren Haynes on lead guitar and lead vocals, Allen Woody on bass and Matt Abts on drums. On Aug. 26, 2000, Allen Woody passed away and the once side gig to the Allman Brothers Band was in question. Many friends of the band chimed in to talk about loss within their own bands and how somehow finding a way forward was a real possibility.

Touring with short-term stand-in bassists Dave Schools (Widespread Panic), George Porter (The Meters) and Greg Rzab (Otis Rush, Buddy Guy) in the early 2000s gave the band time to figure it out. Gov’t Mule continued to tour under the “New School” nickname with guest bass players and keyboardists until they came back with former Warren Haynes’ band keyboardist Danny Louis and bassist Jorgen Carlsson, a Swedish-born-and-raised multi-instrumentalist, producer/mixer and composer in 2008 to form the current lineup.

As with almost any new CD lately, the ‘Rona virus looms large as during the worldwide shutdown, Haynes took the opportunity to keep writing as the band honed their own chops with livestreams, producing and honing their own prowess on the instruments of choice.

In one of the multitude of videos released by the band in anticipation of their Nov. 12, 2021, release of their newest studio CD, “Heavy Load Blues,” Haynes talks about talking with the band and management about how this new “Mule” album was going to come together. It was only three weeks prior to entering the studio that it became obvious that they would make a blues album. No, not three or four blues tunes. No, not most of the album. They would stretch back to their 1994 beginning. They would reach back into their world of musical influences. The answer was obvious: a mid-1950s to mid-1970s-era full album recording of the blues.

The next question was where? According to Haynes, they had to find the right studio where they could set up old-style dirty. They wanted everyone in the same room, no headphones and within earshot of each other.  No vocals booth, no Plexiglas around the drums. Every artist would be able to see each other and their inflections.  All of the recording equipment in the next room. They wanted to more sonically represent the vibe they were trying to produce for Gov’t Mule’s first blues album.

Power Station New England in Connecticut was selected. The band members set up small vintage gear.  Warren admits that most of the equipment was older than he is (born April 6, 1960).  Everything was recorded live to analog tape. Warren pulled upon his years of recording experience alongside engineer and co-producer John Paterno.

So the stage was set for recording. In the Gov’t Mule way, this is a studio effort, but with the musicians all being in one room, the takes were not a cut-and-paste hodgepodge as most studio recordings are. The Mule’s element of live music came through as a vast majority of the release has few over-dubs and little technological wizardry. Hard to get that authentic mid-’50s to mid-‘70s bluesman recording sound with millions of dollars of electronic recording equipment and tone normalizers. Listen for yourself. Did their effort work?

“Heavy Load Blues” proper is a single-disc, 13 track (80 minutes of music) recording released Nov. 12, 2021. (There is also a deluxe two-CD set released with an additional eight tracks totaling another 60 minutes of music.). In the lead-up to the release, Gov’t Mule released videos and singles of “Heavy Load Blues,” “Snatch It Back and Hold It” and “Make It Rain.”  A Gov’t Mule original, a bluesman Junior Wells cover and a cover of American composing icon Tom Waits gave us an idea of the mix of songs coming at us. These and a steady release of other “Heavy Load Blues” official and Visualizer videos are up on YouTube. Check out the band talking about and showing you how they made these tunes.

Most of the tunes run between 4 and 7 minutes with the cover of huge Haynes influence Howlin’ Wolf’s “I Asked for Water (She Gave Me Gasoline)” which clocks in at a little over 9 minutes.  OK, so I guess we found something in this disc that doesn’t stick with the recording standards of the mid-‘50s to mid-‘70s. Pop songs usually clock in between 2 minutes 45 seconds to 3 minutes 20 seconds.

Other covers of note include Bobby Blue Bland’s “Ain’t No Love in the Heart of the City” stretching blues to rhythm and blues to Elmore James’ “Blues Before Sunrise” to Ann Peebles’ “I Feel like Breaking Up Somebody’s Home.”  Each rendition feels familiar, while the band members insert their own feelings at the time to show how the tune influenced them.

The original blues tracks were the culmination of years of writing and a COVID-19 lockdown that made fertile ground for the writing process. The Gov’t Mule website has a description that hits the feeling of the originals into perspective.

“Woke up singing a dead man’s song …” is the opening line from the Warren Haynes original “Heavy Load,” a line of imagery that feels like the beginning of dirt. On this album, the iconic American band puts their unique stamp on a collection of blues covers and originals

According to the Nov. 24, 2021, issue of Volatile Weekly, “Heavy Load Blues” debuted at No. 1 on the Billboard Blues album chart making it Gov’t Mule’s third album to debut at No. 1. “Heavy Load Blues” also reached No. 1 on the Amazon Best Sellers in Blues chart and No. 2 on the Apple Music Blues Albums chart, No. 3 on the Music Connect Current Rock chart as well as No. 16 in Germany, No. 33 in Switzerland, No. 48 in the UK and top 100 entries in Italy and the Netherlands.