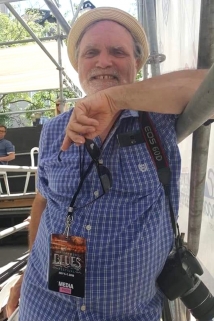 Now for some sad news. If you aren’t on Facebook, you may not know that CBA President Greg Johnson was recently diagnosed with cancer.

The blues community is stepping up to help Greg and his wife Cherie, please help if you can.
Read below for the details from the GoFundMe introduction story below, here is the link to the campaign.

“This GoFundMe campaign is being created for Greg “Slim Lively” Johnson, Portland’s Cascade Blues Association President, who was recently diagnosed with cancer by Tracy Pain.

On Tuesday, March 23rd, Greg was rushed to the ER by his wife Cherie Johnson with abdominal pain.  Upon examination and tests, it was determined that Greg had a potentially dangerous obstruction and had to undergo emergency surgery the following day.  During that surgery, the doctors discovered a mass and performed a biopsy.  That mass was later confirmed as cancer.

While Greg’s doctors were able to successfully treat his obstruction, the news of the cancer was an unexpected and devastating blow to both Greg and Cherie. Aside from the challenges Greg faces in recovering from the invasive surgery he’s just endured (which in itself will involve special care and rehabilitation in the weeks ahead), he is now faced with many months of radiation treatment, chemo, and additional surgeries. As you can imagine, this has been a life changing event for both Greg and Cherie; Greg was forced into taking an immediate leave of absence from his job and Cherie has had to dramatically cut her hours at work to help with her husband’s treatment and recovery.

Both Greg and Cherie have been extremely active in the Blues/ Music community for many years, supporting hundreds of musicians as well as innumerable music industry events and workers.  In particular, they’ve always stepped up in a big way when others have been stricken with cancer or other serious illness.  Now, it’s Greg and Cherie who need our help.  Please, show your support for this amazing, loving couple as they cope with the medical crisis they’re facing.  The upcoming weeks ahead will be critical as Greg undergoes more testing to see how far his cancer has advanced.  We will be posting updates as they come in.”

Debby Espinor and Angie deRouchie have also set up a meal train, the link is here.  If you can’t deliver a meal, but still want to help, the meal train also has options to donate restaurant or grubhub gift cards.

Cherie has also asked Terry Currier, Joey Scruggs and Shelley Garrett to work on a benefit.  Due to COVID we are going to wait until fall.