The Cascade Blues Association in partnership with Artichoke Music, brings the May edition of our monthly blues meeting on Wednesday, May 5. 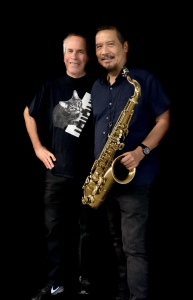 This month’s meeting will be an evening of jazzy-flavored blues featuring Oregon Music Hall of Fame Louis “King Louie” Pain on B-3 organ and Muddy Award Hall of Fame saxophonist Renato Caranto. These two have been performing together for more than 20 years in various formats of blues, jazz and soul, but perhaps most notably behind the legendary Oregon drummer Mel Brown at both Jimmy Mak’s and Jack London Revue (prior to the pandemic lockdown), as well as regularly at the Waterfront Blues Festival.

Louis Pain originally moved to Oregon from San Francisco. He spent several years as the organist for the famed Paul deLay Blues Band, touring the United States and Europe. He has worked with musicians such as Linda Hornbuckle, LaRhonda Steele, Lloyd Jones, Ty Curtis and has a longtime partnership with soul singer Sweet Baby James Benton.

Philippines-born Renato Caranto has put his horn prowess behind many local musicians since moving to America in 1991. Locating in Portland, he worked with various Top 40 bands, laid down his grooves behind the Norman Sylvester Band and jazz greats such as Tom Grant and Michael Allen Harrison. He has also played with and toured with a number of national touring acts such as Bernard Purdie, Clarence “Gatemouth” Brown, Arturo Sandoval and most recently with Merle Haggard and Esperanza Spalding.

This will be an exciting evening of instrumental blues and jazz.