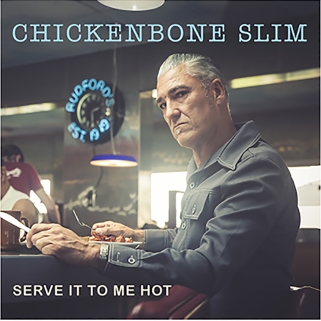 Serve It to Me Hot
Vizztone Records

I promised myself, with some variety of Girl Guide unbreakable vow, that I would not, under any circumstances, allow myself to talk about sex when I reviewed this disc. And then, I got about as far as sucking the marrow out of those chicken bones, and the rest is history.

Any blues fan worth their salt, or their lard, will be familiar with the colorful cast that’s featured on this recording from Kid Andersen’s Greaseland Studios. For the uninitiated, Greaseland lies somewhere between Graceland and the Versace palace on the blues spectrum, a recording studio where mere mortals may go to be elevated to fashionista stadium filler status.

Calling San Diego home, this guitarist, vocalist and composer, Slim (aka Larry Teves) doesn’t start with a PSA about being careful what you put in your mouth. But I will. Oh, geez, I know those chicken bones are tempting, but you could choke if you’re not careful. Perhaps it would be a more sanguine, dignified death than the modern plague that is so in vogue, but I feel we are no longer keeping score at this late stage of the game.

Bandleader Slim wrangles a stellar cast of performers, most notably Laura Chavez of Candye Kane band fame. Slim dedicates an entire track, “Queen of the Wires,” to her six-string prowess. “She’s a lady she’ll cut off your head, melt your face and leave you for dead,” he shouts. It’s like Xena the warrior princess, legs akimbo, ululating (you will hear more of that in “Hey Shakalo”), jumping on your shoulders, then snapping your neck with a twist of her hip adductors. But of course, that imagery would leave us all with some kind of residual longing, and I made a pinky swear before I committed to this, that I would behave.

Marty Dodson of the Fabulous Thunderbirds on drums adds the cervical, thoracic, and lumbar to this recording along with Andrew Crane on bass. This entire ensemble knows when to stay in their lane, and I don’t mean to say that this recording is pedestrian at all. It’s passionate, inspired and frankly kick-ass.

Everything about this disc is quality, from the songwriting to the performances, production and artwork. This is so deeply reminiscent of one of my favorite albums, “Rockin’ Sugar Daddy,” by Sugar Ray and the Bluetones. I’m trying to find a flaw, because I love being the Cruella de Ville of the blues scene, but Slim is making it difficult to skin his Dalmatians. I’ll take all 100 and one of them.

Dionne Bennett – Sugar Hip Ya Ya

Get to know the Groovetramps
Scroll to top