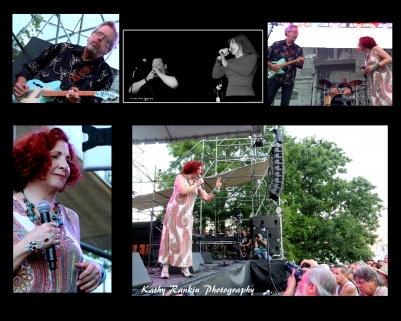 $25 advance/$30 at the door…buy tickets here  (CBA members, see your email blast for a code that saves you $2)

Duffy Bishop and Chris Carlson were mainstays of the Portland (and Seattle) blues scenes for decades before they moved to sunny Florida. Duffy won the CBA Muddy Award for Female Vocalist so many times (12 out of 14 years), that she is in the CBA Hall of Fame and the award is named after her.  The band also won for Best Regional Blues Act in 1994. Duffy has also been inducted into the Oregon Hall of Fame and the Washington Blues Society Hall of Fame.

I had a chance to spend some time with them on a Zoom interview.  As always, the couple was warm and generous … and funny!

The strangest thing happened when I asked Duffy what her favorite memory of her time in Portland was. Believe it or not, she was SPEECHLESS!  Not because she couldn’t think of one, but because there were so many! She said, “How do I isolate just one?” then mentioned all the Waterfront Blues Festival performances. Both Chris and Duffy have great memories of the special shows they were a part of at the Alberta Rose, like the Etta James Tribute. Duffy also mentioned the Ray Charles Tribute with the Oregon Symphony. Another memory was when she was on stage with Paul deLay, and he said “OK when I sing this line grab my belt loop and walk away.”

As for what they’ve been up to lately, they’ve done 48 livestreams, but have only performed three live shows in the past 18 months. Two were outdoor festivals, one was an indoor show.

The indoor show was special to them. “It was at the Bradfordville Blues Club,” Duffy said, “it’s a true Roadhouse down a dirt road to the middle of nowhere and the people reminded me of the blues enthusiasts in Portland.  You know they came to this club, there’s no TVs or pool tables in this club. It’s just listening and people just connected and interacted and it was great fun. You know it’s been hard for me to have a year where I couldn’t hug anybody, but it’s like that human contact thing.”

Duffy also spoke about how hard this past 18 months has been. “It’s been really hard having friends pass away. You know, part of that would have happened anyway at our age, but why has that been accelerated? It’s like Carlton Jackson, I mean where did that come from? A sock in the stomach.”

They also mentioned how influential Greg Johnson was as they were deciding to move down to Portland. Duffy thought it would be warmer and less rain. That never happened, so eventually, off to Florida they went.

We talked a bit about the blues, and the British invasion. Chris mentioned the Rolling Stones. They were asked to do a TV show. They said they would only do it if you have Howlin’ Wolf on.

Chris wants to invite all of you down to the Alberta Rose on the 24th. They are so looking forward to seeing their Portland friends. Chris mentioned that they always do something special there, since the space allows them to do more than they can in a club setting.  They will have a full band with them, including Keith Lowe (bass), Bruce Laven (keys), Jon Goforth (reeds), Chris Leighton (drums), Chris Carlson (guitar) and Duffy!

They will do songs from their 2020 release “I’m Gonna Do What I Want” including a train song, “Whistle Callin,’” which Duffy wrote in Portland. They will also perform “Love Grown Cold,” written by Paul deLay and Dan Fincher, and a selection of the classic Duffy songs we’ve all come to love like “Monkey Pants” and her special rendition of John Lee Hooker’s “Boom, Boom.” They also mentioned “Black Mangrove,” recorded with Carlton Jackson on percussion and Kelly Dunn on drums.

Duffy wants to continue to perform so that we can all feel joy. “It’s a different stage of life and you know you can pick and choose and do the things that make you happy. That’s right … well, this makes me happy.”

They have several dates in the Pacific NW:

Too Slim and the Taildraggers September 29th

Board Update – September 2021
Scroll to top