You are here: Home1 / 2021 September2 / Too Slim and the Taildraggers September 29th 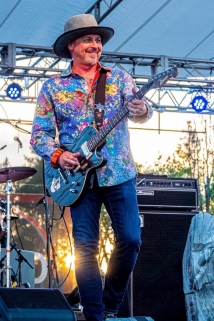 Early 2020 at Zack Kasik’s Wild Feather Recording studio in Nashville. A fist full of songs written and rehearsed. Fresh off of a 2019 Blues Music Award nomination in the Blues-Rock category. Continuing a phenomenal string of 14 studio albums, five live albums and two compilation albums. Six of these albums charting in the Top 10 Billboard Blues albums. Best Regional Band for 11 of 13 years by the Cascade Blues Association (CBA) and Lifetime Achievement Award by the Washington Blues Society (WBS).

March 2020, 11 tunes in the can and a tour in support of the new 15th album, “The Remedy,” booking briskly …BAM … The world begins to shut down as the novel coronavirus, COVID-19 makes people sick and steals lives from individuals and their families across the globe. Billboard’s blues chart again debuts “The Remedy” at No. 3. Pandemic Hold on steroids.

Music fans and venues across the music communities of the Pacific Northwest are obviously hip to Too Slim and the Taildraggers. Started in Spokane in 1986, Tim “Too Slim” Langford is quick to tell appreciative stories of fans in the area letting him and the band flop at their houses after early gigs.

So many venues of all sizes booking and showing support for the band over the past 35 years.

As we start to again be able to cautiously get back out to live entertainment in 2021, Too Slim and the Taildraggers are coming back to Portland. The historic Alberta Rose Theatre and its unique Spanish-Colonial courtyard setting now opens its doors after their own “pandemic hold.” First live show in 18 months, Friday Sept. 10, followed by a line of shows including Too Slim and the Taildraggers on Sept. 29, 2021. Cascade Blues Association supporters know the Alberta Rose Theatre as a supporting advertiser and host to many “Get the Blues at the Alberta Rose” shows.

Originally opened in 1927 as the Alameda Cinema, the facility served to bring people together in the way that only movies can. Although the cinema closed in 1978, in 2005 the building was used to serve the community by the Victory Outreach Church of Portland.

When I interviewed Adam East of the Alberta Rose Theatre for this article, he provided the live performance photo inside the theatre and shared, “We appreciate your support and can’t wait to get back to hosting you all for amazing shows at the Rose.”

So now that the stage is set, so to speak, let’s look at the upcoming show of Two Slim and the Taildraggers at the Alberta Rose Theatre on Sept. 29. Opening the show is Tevis Hodge, Jr. Already familiar to many of you through his regular range of blues- and ragtime-steeped gigs in the Portland area, he also played at the CBA Members Meeting at Artichoke Music on Sept. 1.

Too Slim and the Taildraggers are making their way through Montana, Washington, Oregon and Idaho in September and early October. The band has given us a chart-topping studio CD and now will bring their music to us through live performances again. In October they’ll be in Florida and November in Virginia Beach. Starting back to touring isn’t like it used to be. Every gig is important to getting the music out.  Regular rotation play on XM/Sirius’ BB King’s Bluesville channel and CD reviews at major media outlets are good, but a lot of you already know that watching this trio make their music and work their crowd live is something not to be missed.

To Slim and the Taildraggers consist of:

Zach Kasik – bass-vocals. Yup, for those not paying attention, Zach was mentioned in the first sentence.

Too Slim got his nickname years ago when he wore a younger man’s body. The Taildraggers got their name from the Willie Dixon-written and Howlin’ Wolf-performed 1969 vinyl, 7” – 45 RPM single B side tune, “Tail Dragger.” The A side?  “Evil,” written by Chester Burnett.

Tim wanted me to tell you that he’s considering this gig a “CD Release Party” even though the CD was released back in July 2020.  Well, you heard what happened due to “pandemic hold.”  New CD ready in March, held until July, support tour canceled and No. 3 slot debut for “The Remedy” on Billboard’s blues chart. With their first real tour since the CD release, Sept. 29 at Alberta Rose is going to be a “CD Release Party” and Tim even says with a chuckle, “The Too Slim Mini Mall will be set up.”  This is the kind of CD that you have to purchase 4-5 copies of so you can tell a friend, ”Hey… you gotta hear this,” and then give them a copy of the disc. Good for your friend, good for the band and heaping good for you.

I saw that Delaney Guitars endorses Too Slim and the Taildraggers and remembered that they made a Signature Tim “Too Slim” Langford guitar.  Mike Delaney is known as a guitar player and woodworker, so he chooses the tone, wood, shape, pick-ups and volume/tone controls with his clients to incorporate his craftsmanship with that of the musician. Mike quickly added, “It’s a gift to work with Tim.”  He was proud of the Signature Series guitar as its “grizzly, bad-ass tone is perfect for Tim.”  He even was able to laser-etch and float color into the awesome Too Slim and the Taildraggers logo onto the solid body. How did Mike and Tim meet? Back in the day, Mike booked Tim for a festival in Montana.

Get your tickets for this show early. Check out www.tooslim.net for other gigs within a short drive.  I can tell from the interview that these guys are eager to tear it up.

News from The Blues Foundation – September 2021