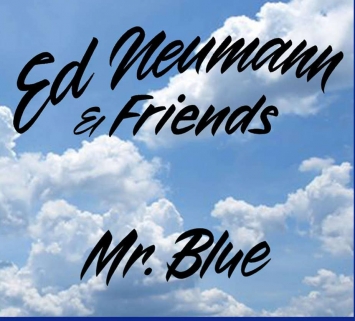 Anybody familiar with the blues in Portland will instantly be familiar with the name Ed Neumann. A stalwart on the music scene, he has played with perhaps everyone at one time or another, including a long-time stint in the legendary Jim Mesi’s band, as well as hosting a number of jams around the city. One of those jams has been taking place at The CI in Tualatin for a number of years and brings in many of the best players each week. A few of those are gathered here on Neumann’s latest disc, Mr. Blue, recorded at Jimi Bott’s Roseleaf Records.

The base of this collection of 12 tracks is without doubt Neumann’s prowess on the B-3, and his charcoaled vocals make his performances instantly recognizable. Mostly cover songs that Ed has made his own through the years, such as “Cry to Me,” “Body & Fender Man,” and “Steal Away,” he throws in a couple of his own self-penned numbers that fit in perfectly, “April’s Swing” and “Mr. Blue.”

The band backing Neumann is a strong unit that has worked with the very best themselves, with Jimi Bott on drums, Jim Solberg on bass and the vocal lead on “Steal Away,” and guitars by Rouke Vanderveen and Mark Shark who is also the featured vocalist on “Keep Your Hands To Yourself.” This is an A-Team band delivering an over-the-top, first-class performance. Hands down a lot of fun is found on this recording. And despite the title of the closing number, “Too Much Cool,” there’s never enough cool when it comes to Ed Neumann and his friends.

Mojo Mambo / I Wanna Thank You Baby / Keep Your Hands To Yourself / Cry To Me / Steal Away / April’s Swing / Body & Fender Man / Good Rockin’ Mama / Mr. Blue / Squeeze Me In / Teeny Weeny Bit / Too Much Cool