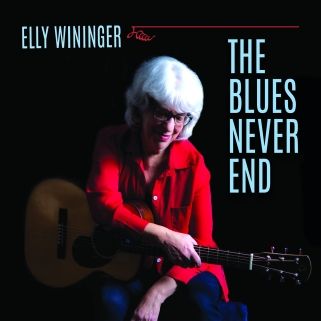 Lulled into a false sense of security by the innocuous cover art, Wininger had me fooled for the first few minutes of the listening experience. Styling some silver bangs and sensible glasses on the front jacket of ‘The Blues Never End,” I must confess my first thoughts were of my favorite auntie or diner waitress.

“Oh, this will continue to be a nice ambling lazy Sunday mix of country, folk and Delta blues,” I said to myself, and went about my morning. That is, until Wininger launches into “Alabama Blues” and I realize I have been duped. Favorite auntie, she is not. Wininger is akin to a Valkyrie atop a flaming chariot, a veritable Boadicea of the blues, a badass in a bronze breastplate leading an army of amazons. Her lyrics are a scathing indictment of the restrictions that are being placed on access to abortion, and she also references incest as the reason for needing the procedure. This song could not be more relevant right now. Wininger’s boldness and courage in tackling these issues in her art, in the context of an America that’s as divided as a quotient, has to be commended.

It’s not just “Alabama Blues” that will get your attention. All the original numbers on this album glow like a white dress in a nightclub. From the slinky, sultry “Right Kind of Trouble” to the Zydeco bop of “(I Wanna Be Like) Rosie,” Wininger has obviously earned her place in the New York Blues Hall of Fame. She showcases her diverse understanding of blues styles, using a range of instrumentation, in tracks such as Blind Lemon Jefferson’s “Black Snake Moan.” However, most of this album is carried by Wininger herself on vocal and guitar, and damn, she carries it well.

Bobby Rush Autobiography- I Ain’t Studdin’ Ya
Scroll to top