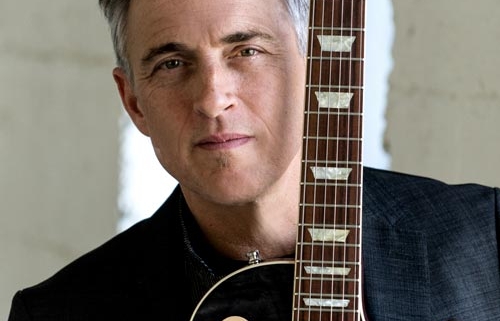 I spoke on the phone with Canadian blues guitarist Colin James while he was in Courtenay B.C. on Tuesday March 3rd

We just had our first show the day before yesterday and I’m here [in Canada] with a three piece, but down there we’re doing a four piece with my drummer Geoff Hicks on all the US shows. We do have to scale the band down a little bit though, so my harmonica player, Steve Marriner, is playing bass and a contraption he’s designed where he can play harmonica at the same time. Tim and Kirk will be with us too. It’ll be a lot of fun.

Freedom and National Steel and Forty Light Years are powerhouse songs. Do you have plans to go back to doing originals after these two albums (Blue Highways, Miles to Go) of predominantly covers? What’s next for you?

Yeah you know, everything’s always in a constant state of flux, and for us in a way, although I love Hearts on Fire and records like that, I guess these last two blues records were kind of a bit of a rebirth in the States as far as listeners. We started playing the blues cruises because of the blues record that we put out and that opened a new market for us. So I didn’t mind putting out two blues records in a row and I probably wouldn’t mind putting three in a row, but I definitely feel that call to have more original material. Even if you go back to material you’ve already written, if it fits the bill you know that’s perfect. I do love writing and I know they both have their thing. I’ve also done some records where I don’t write and I kind of rely on great old songs. I like that too. But I get the itch both ways you know. Yeah I’m ready to put more originals on records. For sure.

I’ve seen you play the gamut of genres since 1988 … will you be doing another jump album or trying something new again?

We had some fantastic great shows with the [Little Big] Band. We opened up for three Stones shows with that original Room Full of Blues Little Big Band and that was particularly fun. The only thing is, in this day and age, it’s hard to tour it because they are big, and when people are already having trouble getting less revenue through record sales and everything, that’s the only thing. I’m always open to listening to see if there’s any kind of trend towards it. I’ve been lucky to be on the receiving end of good timing on that a couple times, maybe not as good as it could’ve been, but good timing. So I want to make sure I don’t go through a big effort to do one and then find out there’s no real movement to listen to that right now, because it’s a lot of energy. So it does come up. I’ve actually thought about why don’t we get the original band together and do a live performance at a famous venue for a few nights where we record it live. Anyway it gets brought up every once in a while, that’d be a blast.

A lot of our audience heard you for the first time at the Blues Bender, and I’m seeing Canadian blues being embraced down here. Given that you’re a household name in Canada, have you noticed there’s a difference between your Canadian audiences and American audiences?

*laughs* Yeah for sure, it’s always been a challenge for me in that regard. I was tied recently to an American label and at that time I had a big label push where they put me opening up for ZZ Top through the east coast states. But now I gotta go out there and started doing the Las Vegas shows and the Blues Cruises. And we realize there’s a place for us here because we did well on those things and that’s a great way to go. So we’re working on it, and that’s what this is about. I know it’s not going to be typical of a show up in Canada but you have to get out of your comfort zone sometimes. We’re gonna do it and have some fun and play the Albert Rose. We’re looking forward to it. I know my drummer is really looking forward to heading down. Last time we played the Alberta Rose we had such a good time, Curtis Salgado showed up last time and we had a really good time.  We’re playing Bremerton (the night before) with Coco Montoya. Coco’s an old friend of mine I’m looking forward to seeing him again.

Congratulations on the latest Juno Award for Miles To Go and winning the 2020 Maple Blues Electric Act of the Year Award.

Question from a friend: What do you consider your greatest achievement or most memorable moment?

Uh! Jeez that’s kind of a toughie…. give me a moment … I suppose you know when you look over time, some of it is continuing to make records through life, through having children and all that, keeping the career going, keeping it all going. There’s musical memories for me … I tell ya, any time I’ve ever had a chance to play with Mavis Staples on stage or any of my heroes it’s one of those moments… like Bonnie Raitt. I’m not sure if those are accomplishments but yeah, all the times Bonnie’s got me up and I’ve sat in … or Pop Staples, when Pops got me up years ago, that was before I met Mavis, and  I’ve been really lucky that way, lucky to play with a lot of my heroes. So that’s been really fantastic.

Yeah you know [the Blues Cruise and Blues Bender] was a great way to introduce [us]. We’re doing Vegas again this coming year. They like us enough to get us back there so we’ll keep on doing that. Now we just have to find a way to get to the festivals and get to the Waterfront Blues Festival in Portland and so on.

I’ve been used to carrying on a certain way in Canada.  I can’t do the same thing here so we have to find ways to make it work. And it just takes work. But I’m at a time in my life right now where I’m ready to do that.  My kids are in school, at university and left home, and I’m ready to play. And I think that’s where we’re at now which is a cool thing. We’re ready to try to open up some markets and we’re working in that direction.  As of last year we started kind of working with some American agencies and we’re furthering that and I think it’ll help. And I’m excited about that. This time we’ll just have fun with what we got here.