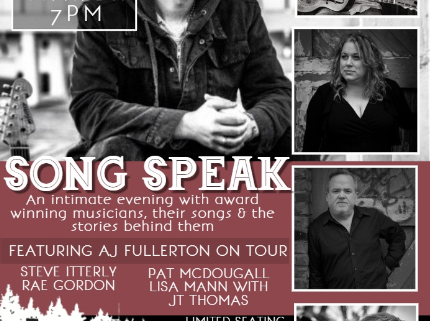 Lake Theater & Cafe brings you an opportunity to experience live original music at its best – with the songs, stories and strategies behind them from the songwriters themselves. This intimate and wonderful show features AJ Fullerton from Colorado along with Northwest-based musicians Steve Itterly, Lisa Mann, Rae Gordon and Pat McDougall performing and speaking. It will have you appreciating the passion behind the prose.

AJ Fullerton is a young multi-award winning roots and rock guitarist and songwriter that is fast making fans all over the world from his authentic style, busy touring schedule including the Big Blues Bender and lyrics that get right to the heart of the matter. He was raised in rural Colorado and is well-known for his skillful guitar, and powerful vocals and is often called “Beyond his years”. His playing style falls somewhere between the finger picking & slide of Country Roots music and the groove based up-tempo sensibilities of Hill County & Delta Blues. His awards have includes the Colorado Blues Society Members’ Choice Awards, best guitarist, best vocals, songwriter and recording, among others.