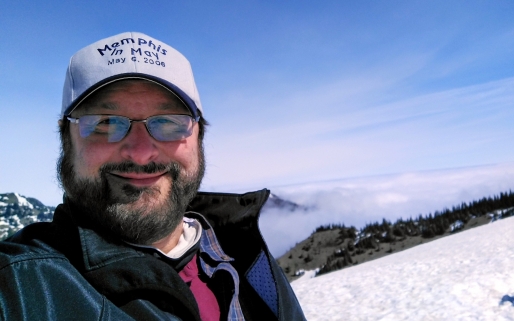 Introducing Kirk Anderson, our new Blues Notes contributor. He’s written two articles this month, one about the upcoming Allman-Betts show at the Roseland and another from an interview with Too Slim for the event at the Alberta Rose Theatre. Kirk also writes for the Washington Blues Society. Thanks to their president, Tony Fredrickson, for the connection!

The cap (in the photo) Lazy Lester gave me about 10 years ago when I was able to talk to Warren Haynes about letting Lester sit in on a couple of tunes at a Gov’t Mule show in Reno.  Lester was so appreciative, even though he’s toured worldwide, he took his cap off of his head and put it over his heart and thanked me and said I’d like for you to have this.

Three years ago, I moved from Atlanta to Seattle for a new direction in life. I found that the PNW had many music fans that were like me. We have our favorite bands and musicians in the blues, but we also understand how important our local blues music scenes are to our communities. We want to know the influences of the musicians we see on stage. We want to support the scene that supports our love.

He says this about Allman-Betts …

I was a tour manager for the Oakley Krieger Band whose musicians were Berry Duane Oakley, Waylon Krieger, Duane Betts and Alec Puro. As a regular writer and columnist for internationally distributed “Hittin’ the Note” magazine, I had the chance to cover the original talents of Devon Allman, Duane Betts and Berry Duane Oakley as they worked through their individual projects. The Allman Betts Band is a logical progression in their musical growth where this band of adults has serious recording and touring backing as they present a professional concert.