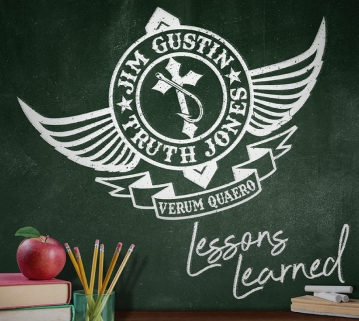 After four decades of singing the blues up and down the West Coast, Jim Gustin and Truth Jones are ready to impart some of the wisdom they’ve gained along the way – and it’s wisdom well worth hearing.

Pay close attention, because here are a few examples of what we can pick up from the Southern California duo’s third album:

Drinking can lead to bad decisions that you’ll regret the next day. “I’d Been Drinking” recounts some vivid and instructive examples.

If you treat a woman badly, you’re apt to regret it. “She might forgive you … but she’ll never forget,” the band warns in “Never Forget.”

And no matter how far you think you’ve come, “Never Too Big for the Blues” reminds that pain and loss can track you down and make you hurt.

We don’t mean to lecture, though. “Lessons Learned” is the work of some seasoned pros who know how to make some unapologetic blues. Wisdom aside, the music absolutely stands strong on its own. It’s easy to see why this band made the semifinals at the 2020 International Blues Challenge in Memphis.

Gustin’s powerful voice sounds like aged-to-perfection whiskey, pairing perfectly with the versatile Jones, who makes everything from soulful blues to gospel seem effortless.

Gustin produced the album, while Terry Wilson co-engineered, mixed and mastered it.

When it’s all said and done, the instrumentation and unflinching vocals add up to a full-on sound that’ll have you longing for a night of live music, or at least maxing out your earbuds.

Through all 11 songs on “Lessons Learned,” the band stays true to the motto inscribed on their logo: “Verum quaero” — to seek truth. And yup, you’ll find some true blues here. Perhaps even a helpful reference when you’re seeking your own truth.

Keep this one handy. It’s gonna grow on you.

Fiona Boyes – Blues In My Heart
Scroll to top