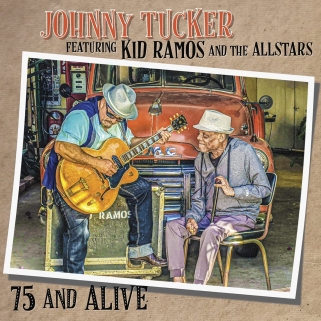 Following the 2018 success of Johnny Tucker’s acclaimed, but austere “Seven Day Blues,” his manager, Bob Auerbach, figured it was time to open things up.

So Auerbach invited L.A. guitarist Kid Ramos and pianist Carl Sonny Leyland to pull together some serious talent and build a backup band for Tucker.

And boy, did they: John Bazz on electric and standup bass, Jason Lozano on drums, Ron Dziubla on sax and Bob Corritore on harp signed on as the Allstars.

Then Auerbach cleared the floor and let ’em play. The result? A genuine, one-take recording among friends on Tucker’s 75th birthday.

From the downbeat of the album’s first song, “All Night Long, All Night Wrong,” you know you’re in for a treat. Tucker’s voice summons distant, but distinct, styles – old-school Chicago, West Coast jump, New Orleans R&B.

The Fresno, Calif., native – who cut his teeth beating rhythms on pots and pans during family jam sessions – sings with the hard-earned authority of an artist and the joy of a master.

His casual asides and between-song conversations speak to his comfort level with his craft and his collaborators. And as the songs unwind, the mood relaxes.

“It just flowed in my head,” Tucker explains in the album’s liner notes. “I didn’t know what I was going to say until I said it. So it came out beautiful, man. Everything was right on time, like I’ve been doing the same songs for a long time, and that’s the first time I did it.”

Tucker devoted the CD to his wife, Georgia May Tucker, who sat in on the session, but passed before the album’s release. Wherever she is, we’re betting she loves this collection as much as we do.

This is one of the most authentic and enjoyable albums we’ve heard in a long time. We recommend you buy at least two copies – you’re either gonna want to pass one along to a friend, or you’re gonna wear out your own in a very short time.

All Night Long, All Night Wrong / There’s a Time for Love / If You Ever Love Me / Can’t You See / What’s the Matter / Treat Me Good / Snowplow / What’s On My Mind / Hookline / Dance Like I Should / Have a Good Time Tonight / Gotta Do It One More Time

Key Events and Save the Dates! October 2021
Scroll to top