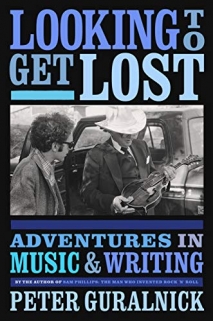 Looking to Get Lost

Adventures in Music and Writing
By Peter Guralnick

Peter Guralnick is arguably one of the foremost musical historians and biographers of our time. His books on the lives of Sam Cooke, Sam Phillips and Elvis Presley are definitive, and his collections of his writings such as the tomes Sweet Soul Music and Lost Highway bring to life to personalities and individuality of musicians covering the blues and other forms of American music.

Guralnick has been doing interviews and stories for numerous publications since the 1960s. His newest book, Looking to Get Lost, is another indispensable collection of his works that features a great deal of those who influenced his musical, and written, tastes throughout his career. His love for the blues that made him want to write about musicto begin with is well presented, from his very first interview with original bluesman Skip James, to encounters with the likes of Willie Dixon, Howlin’ Wolf, Solomon Burke, Lonnie Mack and a full interview with Eric Clapton. But it much more than just the blues. His pieces cover the history of modern music, with chapters covering people like Ray Charles, Merle Haggard, Colonel Tom Parker, Johnny Cash, Bill Monroe, Doc Pomus and train song balladeer Dick Curless.

This work is also quite personal as he talks about his family relationships, his love for authors such as Southerner Lee Smith and British writer Henry Green, and those he considers the top entertainers in his experiences that stand out (Solomon Burke, Jerry Lee Lewis, James Brown and Howlin’ Wolf).

There is much to consume with Guralnick’s pieces. The never-ending heartbreak of Dick Curless’ quest to become more recognized. Colonel Parker’s reluctance to speak directly about himself, but always seemingly willing to give direction to somebody who would. Johnny Cash’s open kindness to his fans always wanting to give back to them. The self-assuredness of musicians like Burke, Wolf and Jerry Lee Lewis (with the humorous tale of his first and only piano lesson where the teacher gives him a piece to learn, and he brings it back playing it perfectly. But then asking the teacher, “but doesn’t is sound better like this” as he improvises his own changes to the number.).

In all of Guralnick’s material, you come to know the subjects more intimately. You may or may not always like how that person represents themselves, but you’re always going to want to keep reading. Finishing one chapter immediately makes you want to go onto the next. That is the true caliber of Guralnick’s skills; it’s hard to put down and leaves you wishing for more when you reach the end. For those who have a love for modern music, nobody will keep you enthralled more than him.