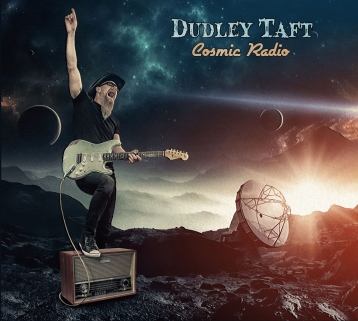 Finally. Something good has come of the COVID-19 catastrophe.

Though the damage the pandemic has done to the live music business is “a real blow to the solar plexis,” blues-rocker Dudley Taft says, he admits that spending endless hours in quarantine has at least given him unexpected time to craft the 12 tracks on his latest album, “Cosmic Radio.”

And the extra work shows.

The album launches with the title cut, which Taft wrote while vacationing in the Bahamas. With vocals amped with rock-style reverb, a rolling drum line and axes cutting a wide swath, “Cosmic Radio” seizes your attention from the first downbeat.

Taft says he wrote the song in one night – along with a second song, “Hey Hey Hey.”

“There’s something about the Bahamas that spurs my creativity,” he says in a liner note on his website. “Maybe it’s the weed?”

One of the most notable standouts on the album is “Relentless,” Taft’s first formal collaboration with his daughter, Ashley Charmae. She takes lead vocals on the song and adds backups on several others on the album.

Other must-hears: “The Devil,” “Left in the Dust,” “The End of the Blues” and the soft ballad “I Will Always Love You,” which features more Charmae vocals and incorporates a World War II-era piano that an old family friend wanted Taft to have.

Written between fall 2019 and this past spring, “Cosmic Radio” also presents some of the first music written about the pandemic. “I’m a Believer,” for example, was born of Taft’s frustration with the ongoing problems and limitations the coronavirus has caused.

Jason Patterson and Chicago’s Walfredo Reyes Jr. – who’s worked with Santana, Traffic and Steve Winwood — split the work behind the drum kit, while Kasey Williams sits in on bass. John Kessler — who worked with Taft when the two were playing in rock bands in the Seattle area starting back in the ‘90s, and who’s headed up the Puget Sound’s KNKX blues program for the past two decades — takes a turn on bass for “Goin’ Away Baby” and “The End of the Blues.”

The 54-year-old Taft built his reputation during the 1990s as a rocker with the Northwest bands Sweet Water and Second Coming, but in recent years he’s returned to his native Midwest. The great-great-grandnephew of President William Howard Taft established his home base in Cincinnati in 2013.

He also seems to have built himself a comfortable home in the blues.

Looking to Get Lost
Scroll to top