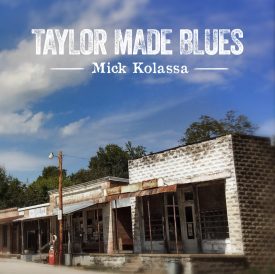 Mississippi-based bluesman Mick Kolassa is back with his third recording in as many years, and as with those previous two he has hit another winning formula with Taylor Made Blues. Kolassa is an exceptional musician, working his acoustic guitar around his gravelly voiced singing. As a songwriter he is quite sincere. These are honest songs, often humorous, then at times telling emotionally from experiences filled with heartbreak and loss. Exactly the base that any strong songwriter and blues musician should draw upon. It is life and it is real. You have to live it to bring it across right. And Kolassa has done just that.

His heart is reflected in a multiple manner of expressions throughout Taylor Made Blues. He mourns the loss of his closest friend and brother-in-law Ted Todd in “Left Too Soon,” and pays tribute to the Brazilian fishing guide he shared friendship with in “Raul Was My Friend.” But he is not only filled with sadness on the album and he shouts out his happiness for those he still has in “With Friends Like Mine” and his love for his wife Molli in “Baby Faced Louise.”

Eight of the dozen tracks are Kolassa originals, with a ninth, the number “Keep A Goin’,” he has reworked from the Frank Stanton poem written nearly a hundred years ago. The three other selections are covers of Graham Nash’s “Prison Song,” Townes Van Zandt’s “Lungs” and The Temptations’ “I Can’t Get Next to You.” All are done tastefully in Kolassa’s own approach.

Named after the town he lives in, Taylor Made Blues was recorded in Memphis’ Ardent Studios with guitarist Jeff Jensen once again serving as engineer. Alongside Jensen, the core behind the album’s band is bassist Bill Ruffino, drummer James Cunningham and keyboardist Chris Stephenson. Kolassa also draws upon his wealth of friends to assist, including some of the finest in the region with Victor Wainwright, Castro “Mr. Sipp” Coleman, Eric Hughes, Reba Russell and Tullie Brae, plus Long Tall Deb Landolt, and Colin James also flew into Memphis to lend a hand.

As he has done with his other recordings, Mick Kolassa will donate all proceeds from the sale of Taylor Made Blues to The Blues Foundation to benefit their Generation Blues and The Hart Foundation programs. So the purchase of the album benefits you twicefold as you not only receive some terrific material to listen to, you also help young artists and musicians in need at the same time.

Taylor Made Blues is a very personal recording by Mick Kolassa. Filled with life’s ups and downs, he has once again delivered an exceptional album that stands out in every sense as genuine and bona fide as it comes.